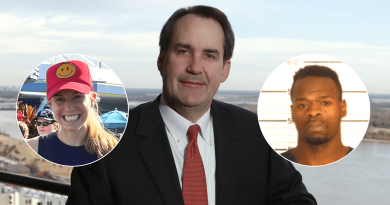 Eliza Fletcher, a 34-year-old elementary school teacher, was kidnapped by Cleotha Abston, who was previously jailed for kidnapping a lawyer. Abston appeared in court on September 6 for the Fletcher kidnapping and pleaded his defense against charges of specially aggravated kidnapping and tampering with evidence. However, a former FBI investigator has linked this kidnapping to Fletcher’s uncle, whose former co-worker was kidnapped by none other than Abston himself.

Jennifer Coffindaffer, in a conversation with NewsNation, linked Eliza Fletcher’s kidnapping to that of Memphis attorney Kemper Durand, who worked at the same law firm as Fletcher’s uncle, Michael Keeney. She said: “I think this is a very important lead, and I’m sure the FBI, US Marshalls and TBI are watching this relationship closely.” In 2000, Cleotha Abston pleaded guilty to Durand’s kidnapping and was charged with 24 years in prison, but got out in 20 years. Coffindaffer reflected on Abston’s early release from prison, saying, “Any time someone gets out early and goes on to commit another violent crime, yes, I think society is disappointed. I think we’re all disappointed by his early release.” To little surprise, Abston has an extensive rap sheet that she began when she was only 12 years old, which included charges of robbery, aggravated assault and rape.

Abston was 18 years old at the time of that abduction when he, along with an accomplice, abducted Durand. They threw him into his own trunk and forced him to withdraw money from an ATM at a gas station. Durand died in 2013 and his LinkedIn shows that he worked at the Thomason Hendrix law firm, which is the same as the law firm of Michael Keeney. According to the Commercial Appeal, Durand was rescued by a nearby Memphis Housing Authority guard who heard his cry for help. In his victim statement, Durand wrote: “It is very likely that I would have been killed if I had not escaped.”Abston attacking Fletcher, another person related to Michael Keeney arrives as a surprise. But who is Eliza Fletcher’s uncle?

Keeney is an attorney with the Memphis office of the ‘Lewis Thomason Law Firm,’ which was formerly known as the Thomason Hendrix Law Firm prior to its merger with the Lewis King Law Firm. According to the firm’s website, he practices civil litigation and has handled matters in state and federal court. He has been defined as an active member of the community with extensive trial experience as well as experience handling appellate matters. He is a member of the Board of Directors of the Central Board of the Boys and Girls Club of Greater Memphis and also serves on the Board of Commissioners of the Memphis Shelby County Airport Authority.

Keeney joined the law firm of Thomason, Hendrix, Harvey Johnson & Mitchell, PLLC, as an associate in 1993, sending his career into hyperdrive. He later served as partner and managing partner. He is a Rule 31 mediator in general civil mediation for the Tennessee Supreme Court and has also been a hearing officer for the disciplinary board of the Tennessee Supreme Court. The Martindale-Hubbell legal directory has given Keeney its highest rating, AV Preeminent, and he has been named Best Lawyers in America since 2008. According to the Tennessee State Museum, he is also a member of the Orgill Board of Directors, inc.