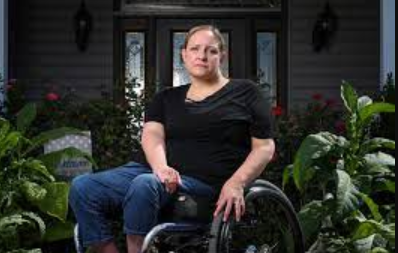 A woman who was paralyzed from the chest down in a 1997 school shooting shared relief that a parole board decided to keep her attacker in prison for the rest of his life. Missy Jenkins Smith, 40, watched on Monday as all members of the Kentucky State Board of Parole voted to have Michael Carneal, 39, serve the remainder of his sentence: life in prison. She told The Independent that now she and other victims no longer “have to worry about anything to do with him trying to get out” of prison again.

Carneal had even tried to contact Missy after paralyzing her, injuring five other people and taking the life of 14-year-old Nicole Hadley; Jessica James, 17; and Kayce Steger, 15 at Heath High School on December 1, 1997. The Hadleys testified before two board members on September 19, as did Missy and injured student Hollan Holm. He was the only person who was not against parole. Carneal himself testified the next day. Missy wasn’t impressed.

“I thought he would be much more prepared than he was,” she told The Independent. “I was very surprised… it was as if there was no responsibility for oneself. It was like letting everyone else do it for him. When asked about a plan, it was like, oh, my parents.” The board president noted that Carneal had not written his own letter to the board to present his case. “I had so many theories in my head, like, what is his agenda? Does he really not want to go out? Missy told The Independent after her testimony. “Does he really not realize… that he had to do this? You know, what’s going on here?

“You’ve been cared for for so long,” he said, adding, “Even after 25 years…was he preparing for that? Obviously he hasn’t.” On September 20, Carneal told the board that his sister and his parents, with whom he would initially live in any release, were supportive and promised to take him to any medical appointments. He said that he was taking three psychiatric medications and that he would continue outside care if he was released. “I think I can do a lot of good,” Carneal said, adding that he would be satisfied with a job in fast food or sanitation or anything, really. “I think he could fit into the community. I think he could benefit people in general.”

One of his victims, Hollan Holm, who was shot in the head by Carneal and still has the scar on her hairline, pleaded on September 19 for his attacker’s release. “I was still a kid,” said Holm, who was 14 at the time of the shooting and will turn 40 in December. “Everyone in the lobby at Heath High School that day, including Michael Carneal, was a child. It took me 25 years to fully appreciate how little I knew that day: how much of life I hadn’t lived and how far from an adult I was in my thinking and ability.”

Carneal told the board that he felt responsible for the plague of mass shootings that followed his actions; While he wasn’t the first school shooter, Columbine followed soon after, in 1999, and anchored the crimes as a national horror. Carneal said he killed himself and was hospitalized when he heard the news. He also apologized for his murder spree and said he felt people saw him as “a monster.

” “It makes me feel terrible to hurt someone, my friends or not my friends,” he said. “I’m sorry for what I did. I know that nothing will change; it’s not going to improve anything. But I want you to know that I’m sorry for what I did.” After the two parole board members failed to reach a decision last week, it was adjourned until Monday, when the full board voted unanimously that he will never be released.

Read Also:  Who was Brooke Bailey? Wiki, Biography, Age, Family, Cause of Death