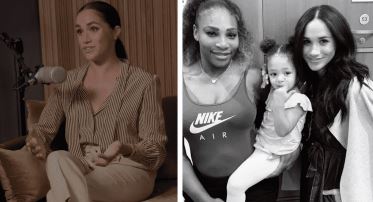 Meghan Markle’s long-awaited podcast ‘Archetypes’ dropped on Tuesday, August 23. With all eyes (and ears) on the debut episode, critics have one thing to say: Meghan Markle spoke far more than her guest. According to critics, the former royal could have allowed her guest, tennis legend Serena Williams, to share more of her stories instead of monopolizing the conversation. After all, the 23-time Grand Slam Singles winner has plenty of stories to tell.

The debut episode released on Spotify was titled ‘The Misconception of Ambition with Serena Williams’, with Markle describing her first guest as embodying the “spirit of ambition”. In particular, Williams is friends with the Duchess of Sussex.

According to the former royal’s detractors, the host spoke 1.5 times more than her illustrious guest. This in no way indicates that the tennis legend had a shortage of stories. But she was not allowed to speak long enough. Such a negative reception of the show has led people to label it a “dud”.

People have gone so far as to refer to podcast transcripts. Meghan’s critic, Daniela Elser, wrote: “Meghan, based on the available transcript word count, was responsible for approximately 61 percent of the conversation,” while the illustrious tennis champion “reaches the 39 percent mark.” hundred”. She concluded: “To put it another way, Meghan spoke for about 1.5 times as long as the woman who was there to tell her story.”

Such criticism of the debut episode of ‘Archetypes’ will no doubt affect the podcast’s ranking which has yet to break into Spotify’s Top 100 for individual episodes in the UK and US after 24 hours of release. Elser said the entire episode could be summed up as “Meghan, Meghan, a touch of Harry and some more Meghan with a bit of Serena here and there. So Markle is essentially using her podcast as a platform to engage with listeners and share her own personal opinions and stories, rather than those of her guest, who, in her own words, is a ‘trendsetter, trailblazer, businesswoman, mom.'”

The Duchess of Sussex has notably “shed” any other markers of her identity for the podcast and will present all episodes simply as “Meghan”, something that has also appeared on promotional posters for her podcast.

Read Also: Who was Kutin Gyimah? Wiki, Biography, Age, Family, Cause of Death