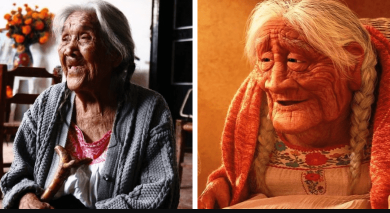 María Salud Ramírez Caballero, the Mexican matriarch who is believed to have inspired the character of Mama Coco in the 2017 Disney and Pixar film ‘Coco’, died on Sunday, October 16. She was 109 years old. In order to find inspiration for the Rivera family, “Coco” director and co-writer Lee Unkrich and his crew reportedly spent two years in the Mexican provinces of Oaxaca and Guanajuato. The Caballero family insists that Mama Coco’s appearance was based on the likeness of Maria because she was photographed by a member of the production team.

However, the claims have never been verified by Disney or Pixar. Roberto Monroy, secretary of tourism for the state of Michoacán in Mexico, announced her death on Twitter. Caballero died in Santa Fe de la Laguna, where she grew up. Monroy tweeted: “I deeply regret the death of María Salud Ramírez Caballero, ‘Mamá Coco,’ a tireless woman and example of life, who was the inspiration for this beloved character who went around the world.”

Along with Monroy, many “Coco” fans took to Twitter to mourn her death. One user tweeted, “I’ve been crying all morning. BTS is enlisted in the military and won’t be back until 2025. Just found out MAMA COCO JUST DIED THIS MORNING. I’m going to watch Coco tonight,” while another tweet read : “I woke up to find out that the real mama coco died,” accompanied by a series of crying emojis. One tribute read:

“RIP MAMA COCO. Sad I didn’t get to meet her before she passed, but 109 years is a long life.” Another user tweeted: “This movie touches the heart because Mama Coco reminded me of my dear grandmother and this ending is so beautiful and for me it is THE best Disney movie. RIP Maria, I hope one day your family will receive their royalties for a beautiful movie”.

Acknowledging that the team visited Santa Fe de la Laguna during their investigation, Unkrich admitted on Twitter that the village became “a visual inspiration” for the film. However, he disputed the suggestion that Caballero inspired Mama Coco, insisting that no one on her team had ever met her. Later, Unkrich co-signed a letter advocating for Mama Coco’s universal representation and posted another tweet expressing his condolences.