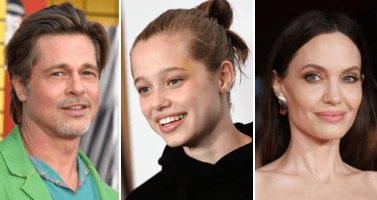 Angelina Jolie and Brad Pitt may have turned down lucrative modeling offers for their 16-year-old daughter, Shiloh Jolie-Pitt. Shiloh is already making headlines at the age of 16 with every little move. She recently wowed fans with her dancing skills and many are wondering what she will eventually become passionate about. There have been reports suggesting that the teenager wants to follow in the footsteps of Kendall Jenner and Kaia Gerber and become a runway model.

An offer worth millions was also said to have been extended, but it is possible that Brad and Angelina stepped in with Shiloh’s best interests in mind. It’s safe to say that Angelina Jolie’s doppelganger is destined for fame, especially considering her parents’ success and her name recognition. A source told Star magazine that the teenager was already receiving huge offers from modeling agencies.

“They’re getting closer now,” the source said. “With parents like Angelina and Brad Pitt, Shiloh will have no problem landing a modeling contract. She could easily make $10 million a year just for being who she is.” It’s unclear if the claims are accurate, considering there are no reports yet that Jolie-Pitt has agreed to a deal with a modeling agency. However, the same source insisted that the teenager was delighted with the offer, but apparently her parents have different plans for her future and want to prioritize education over modeling projects.

Shiloh is said to have a lot in common with her father. A source close to the actor told Life & Style that the father-daughter duo “really have an unbreakable bond,” adding, “The couple have a loving, fun, authentic relationship and they’re cut from the same cloth.” Brad and Shiloh are “very much alike,” another source told In Touch, stating, “Not only do they look alike, but they have the same big hearts.”

They are very compassionate and loving. They are both very open, they like to meet new people. Shiloh seems to have somehow picked up on Brad’s Midwestern demeanor. Meanwhile, Angelina Jolie has admitted that she wants her children to be curious and explore the world. “I think we live in a different era and the education system hasn’t caught up with our kids and our way of life,” she told the Telegraph in 2011.

“But we travel and I’m the first person to say, ‘Finish the schoolwork as fast as possible because let’s get out there and explore.’ I’d rather they go to a museum and learn to play guitar and read and pick a book they love.” That said, it seems that both Brad and Angelina want her daughter to focus on school before anything else, considering she’s still only 16 years old. Therefore, Shiloh is not expected to accept any “lucrative offer” that comes his way, at least for now.

That said, Shiloh could also pursue a career as a dancer, especially after her skills went viral on social media. Brad got excited when asked about the popularity of her moves. “She makes me cry, yes, she is very beautiful,” he told ET in August. The ‘Fight Club’ star joked that she definitely didn’t get her dancing skills from her genes.

“I don’t know where she got it from. I’m Mr. Two Left Feet here,” he joked. The caring father said he loves it when his children take a genuine interest in something and thrive on it. “I love when they find their own way, find things that interest them and thrive,” he added.