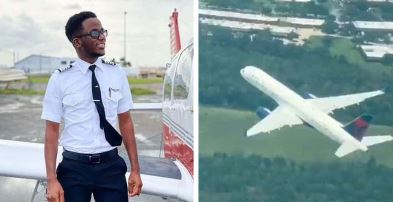 A single-engine Cessna narrowly avoided colliding with a Delta Boeing 757 airliner over Orlando International Airport on August 17. A video of the accident, which could have resulted in numerous deaths, has gone viral. Traffic was heavy ahead of the busy Labor Day weekend when the smaller Cessna flew within 500 feet of the crowded jumbo jet leaving Orlando.

The video, shot from inside the Cessna, shows the pilot’s quick response to the emergency. He took immediate evasive action by climbing over the rapidly climbing plane, narrowly avoiding a collision by a few feet. In a recent interview with ABC News, the pilot, Malik Clarke, described the terrifying encounter, describing how he had to take “evasive action” to avoid the much larger and more crowded plane. The FAA is investigating the incident.

Clarke wrote: “This happened to me and two of my friends I was flying with two days ago (08/17/2022). The controllers at Orlando Intl MCO gave me and another Delta Airlines pilot initial directions that they would make us converge after liftoff.” In a recent interview, Clarke said, “I knew this didn’t look good.” He said that as a result, he immediately turned right and climbed as steep as he could because the Delta Boeing 757 has a much higher rate of climb than the plane he was flying.

With only 500 feet between the two aircraft, Clarke’s quick action appears to have saved all the pilots and passengers from a collision that would almost certainly have been fatal. “If I hadn’t made that evasive maneuver, it’s very likely there would have been a mid-air collision,” he said. According to the pilot, when the Delta plane passed right under his plane, it had just changed frequencies and was out of contact with air traffic control, which increased the pressure on the pilot because the survival of both planes depended heavily on measure of it.

The small aircraft, which was only carrying Clarke at the time, is seen in video of the incident taken from the cockpit. He posted it on social media. Both pilots looked at each other and spoke to air traffic control. Steve Ganyard, a former State Department employee now contributing to ABC News, insisted someone was to blame for the incident, but would not say whether it was Clarke or the unnamed 757 pilots. He said: “The two planes came within 500 feet vertically and 1500 feet horizontally, which means they were too close. It was someone’s mistake to put them in the same part of the sky.” A spokesman for Delta, which is investigating the incident, said nothing was more crucial than safety.