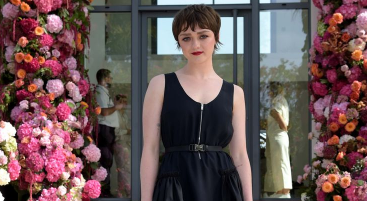 Maisie Williams has recently opened up about her childhood, which was apparently quite different than normal. The 25-year-old claimed on ‘The Diary Of A CEO’ podcast that she “had a traumatic relationship” with her father, whom her mother left when Williams was just four months old.

Speaking to presenter Stephen Bartlett, the actress, who lived in Somerset with her mother Hilary Pitt Frances and her three siblings, said: “Well, me, as a child, before I was eight years old, I had a traumatic relationship with my dad. And I don’t want to go too far because it affects my brothers and my whole family. But, like, that really consumed a lot of my childhood. Ever since I can remember, it’s been hard for me to sleep.”

William continued, as reported by The Daily Mail: “I think a lot of the traumatic things that were going on, I didn’t realize was wrong. But he knew it: he looked at other children and thought: ‘Why don’t they seem to understand this pain, fear or dread? Where does joy come from? When does that come for me? before mentioning: “I had this feeling of imminent death and I didn’t know how to make it go away. There’s a period in your childhood where things can stunt or forever alter who you’re going to become.”

However, Williams’ life changed after she trusted a teacher when she was eight years old. She explained, “When I was around eight years old, there was a pretty complex series of events that happened, but they had basically peaked and I was in school and really struggling. A teacher took me to the staff room. He asked me what happened, he said ‘are you hungry?’ and I said ‘yes’. He asked me if she had breakfast, I said no, she said ‘why not?’ and I said ‘we just don’t eat breakfast’, and then she asked me if she normally eats breakfast.
“They were asking the right questions. My mom came to school and picked me up. It was the first time that all the doors were open and all these things that we were experiencing were on the table.”

Williams also mentioned that she didn’t understand why she was separated from her father at that age, saying, “I still wanted to fight and say these things are not wrong, you’re just trying to get me away from my father and that’s wrong. I was indoctrinated in a way.” “I think that’s why I’m obsessed with cults. Because I’m like, I get it, I get it. I was in a kids’ cult. I was really fighting it at first, my whole world flipped.”
Elsewhere on the podcast, the star, more popular as Arya Stark from ‘Game of Thrones,’ said: “I was so glad I didn’t have to see my father anymore, but it was against everything I’d ever known. You can feel so liberated and free and, at the same time, as if that impending doom is still there. All your problems don’t go away, you still care so much about that person, or the pain that led you to make those very, very bad decisions.”

Additionally, Williams expressed her happiness knowing that she is not responsible for anything bad that happened to her. She added: “To be honest, I’ve been thinking about this a lot. It is not because of me that these bad things happened when I was a child. I thought it was. I thought that there was something inherently wrong with me, that it could be anyone experiencing pain. It made me more interested in the guy. What could make you mistreat your own children? What happened to you as a child? Did you take the legs off the bugs? Did you learn all this? That’s how I feel about him now. It would make a fascinating documentary.”