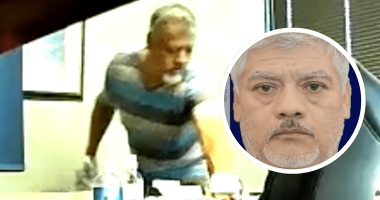 A woman has accused a janitor of contaminating her water bottles in her office, leaving her with an incurable sexually transmitted disease. It all started when the victim, married and mother of two children, noticed a bad smell in the water dispenser intended for employees. When she started bringing her own water bottles to the office, she speculated that her own water bottle was contaminated with urine and urinalysis confirmed this.

The defendant, Lucio Diaz, 50, was charged with indecent assault and aggravated assault with a weapon. Working in an office on East Freeway, the victim became suspicious of illicit activity in August when he noticed an unpleasant odor coming from the employees’ water dispenser. But when she started bringing her own water to work in September, the same thing happened, and that’s when she speculated that her bottle was contaminated with urine.

The 54-year-old victim who wishes to remain anonymous told ABC13 that the janitor who was arrested was a “sick man”. She explains this man’s flow of movement by saying that she “takes his penis out and puts it in my bottle, basically rinses his penis out in the water.” Diaz was charged with indecent assault and aggravated assault with a deadly weapon, both charges related to the same unnamed victim.

She continues, “I found out I got it (a sexually transmitted disease) which he also tested positive for. It gave me an STD that I will have for the rest of my life. Nothing is going to change it. Nothing is going to make it better for me.” In fact, I feel like for the rest of my life, I’m going to have to be careful.” Documents obtained from the court reveal that Diaz is in the custody of Immigration and Customs Enforcement in an unclear position.

The victim continued, “I want this to go to trial. I want him exposed for what he is and I want him to pay for what he has done to me and then have him deported.” HPD’s Major Offenders Division believes more people could be affected, and if so, Lucio Diaz could face more charges. The victim also explained that even after notifying the authorities, Díaz continued to work. The victim’s attorney, Kim Spurlock, said: “They have a duty to protect their tenants and they completely failed in those responsibilities.”

Altera Fund Advisors, the building’s owner, shared a statement from CEO Terry Quinn that said, “Our management company immediately cooperated with the police department on this matter as soon as we were made aware of this potential issue by our tenant. They were informed by the police not to alert or approach the alleged aggressor so that he could be arrested. He was arrested when he was returning to the building.”