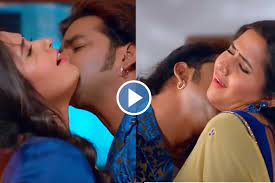 A romantic dance video with actor Pawan Singh and Kajal Raghwani has gone viral. Everyone nowadays enjoys listening and watching bhojpuri music and videos. Bhojpuri dance video Bhojpuri videos are quite popular. Bhojpuri actors and actresses are well-known people who have a large following on social media. Pawan Singh, a Bhojpuri movie superstar, is well known for both her singing and acting. Fans love Pawan Singh for his voice and her performance. The YouTube video of her is currently trending once again.

Kajal Raghwani and Pawan Singh get along well.

For those who don’t know, the incredibly romantic song “Kaise Mein Sejiya Pe Ghungta Uthaungi” by Kajal Raghwani and Pawan Singh is from their hit movie “Maine Unko Sajan Chun Liya”. The film has raised the flag of success with its debut. The lyrics of the song were written by Vinay Nirmal and Chhote Baba created the music.