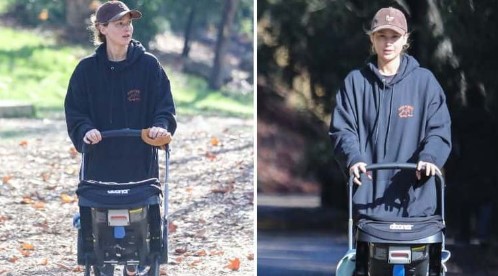 Jennifer Lawrence and her son Cy looked bountiful as they took an evening stroll in a Los Angeles park. Jennifer opted for a casual no-makeup look as she took her 10-month-old son for a nature walk on Friday, December 30. The actress appeared to be alone as she pushed a black stroller with her firstborn that she shares with her husband Cooke Maroney.

The ‘Hunger Games’ actress rocked a casual outfit that included a faded purple baseball cap, black leggings, an oversized black Rack ‘N Reel sweatshirt and shoes. A few days earlier, she was seen taking Cy to a playground in Los Angeles, where she helped him slide down a twisty green slide. She was also seen walking Cy out of the park while she was followed by a friend, according to HollywoodLife.

The photos came just months after Jennifer made waves for initially announcing Cy’s gender and name. She was named for her after Cy Twombly, a postwar American painter who is one of Cooke’s favorite artists, the new mother said in an interview with Vogue. She also spoke candidly about adjusting to life as a new mother. Cooke and Jennifer have been pretty quiet about their journey as new parents.

The actress said that she doesn’t want to talk about parenthood, as it could alienate other new mothers. “It is so scary to talk about motherhood. Just because it’s so different for everyone,” she told Vogue. “If I say, ‘It was amazing from the start,’ some people will think, ‘It wasn’t amazing to me at first,’ and they’ll feel bad.”

Although Jennifer has kept her personal life under wraps, she has sometimes been seen with Cy, including on a family trip in April joined by Cooke’s parents and on a lunch trip to New York City in november. Also, in September, Jennifer was seen filming ‘No Hard Feelings’ on a Long Island beach.