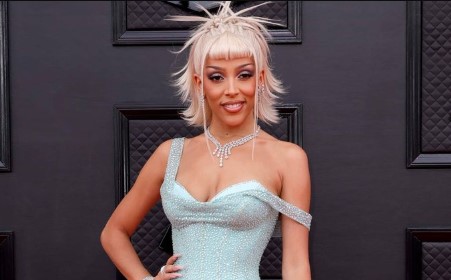 Doja Cat reportedly filed a complaint against an angry fan at the Los Angeles County Sheriff’s Department for threatening to kill her. An angry fan attacked the rapper after she kicked him out of a private online chat. According to TMZ, although the fan was kicked out of the chat, he later returned to the chat and threatened to kill the ‘Kiss Me More’ singer, claiming that he would see her soon.

The Los Angeles County Sheriff’s Department is investigating the incident. TMZ also reported that the fan lives outside of the state of California. The ‘Say So’ singer, who often interacts with her fans online, even sparred with them on Twitter in March and claimed that she left music. The episode began after she canceled her show at the Wizard’s Asuncionico Music Festival 2022 in Asunción, Paraguay, on March 22, due to incessant rain and inclement weather, Teen Vogue reported.

She responded to many disappointed fans, saying that she was “not sorry” for doing the same. To one of the fans, who said: “Doja, about 4 years ago you started to achieve fame and all thanks to tik tok. What happened to your queen of humility? I loved you”, she replied, ”

She left and i don’t give f**k any more i f**in i quit i can’t wait for f*****g to fade away and i don’t need you to believe in me anymore Everything is dead to me, music is dead, and I’m a fucking fool for Thought I was made for this, this is a fucking nightmare, unfollow me.”

Meanwhile, when another fan said, “Just because Paraguayan “fans” aren’t happy with you for not doing something you didn’t want to do, that doesn’t mean your real fans don’t like you. That’s their fault for not respecting your space and privacy they can’t hate. But focus on others who care and understand you,” she replied, “I don’t have to focus on anything because I’m quitting.”

Netizens were quick to react to the chat room incident as one user said, “She’s not sick of chat rooms yet.” Another added: “Why is it still in chat rooms? Isn’t it for real life friends?” Another comment read, “She will never be left out of chat rooms, please be the celebrity you are.” One user stated: ”

Do you know how many death threats come out in a day in a chat room? Hahaha.” “Oh wow she shouldn’t even be back in those chats you poor doja,” one tweet read. “This is what happens when you get locked out of those nasty chats,” added another. One tweet read: “Lord. Protect Doja.” “She never learns,” added one user. “I need Doja Cat to find some hobbies in 2023 and leave the chat rooms alone,” wrote another.