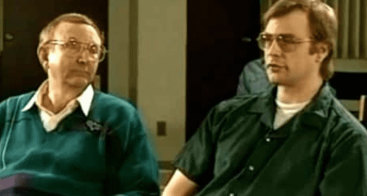 The father of serial killer Jeffrey Dahmer thinks he knows what made his son the way he was. The killer, who killed 17 victims and ate their flesh, is now the subject of a new Netflix series ‘Monster: The Jeffrey Dahmer Story’. The series will star Evan Peters as the title character and feature Richard Jenkins as Jeffrey’s father Lionel. In one of the episodes, Lionel talks about what he believes “started all this”, Jeffrey’s life and the impact of his mother on him.

Lionel thinks that there was a link between his behaviour and the medication Jeffrey’s mother Joyce took before he was born. Lionel says, “You do know that pills are what started this whole thing. How many pills you think she was on when she was pregnant with him? Thousands. She was on sleeping pills, sedatives, seizure medication.” Jeffrey’s father also blames his former wife for not being present in his life. He said, “She never even held him. She scared the s**t out of him. And then she just left. She got in her car, and she drove away, and she left that kid in that house all summer.”

The claims in the show were made by Lionel in real life too, having spoken about the dynamic in an interview with CBS’ Inside Edition. Lionel said, “My ex-wife had been taking about 26 tablets of different medications about one month after becoming pregnant.” Lionel and his second wife Shari also spoke about Joyce’s parenting on TV special ‘Dahmer on Dahmer’, saying that Joyce hardly touched Jeffrey as an infant. Shari said, “When Jeff was born, the grandparents were not allowed to hold the baby.Joyce didn’t want anyone touching the baby, or breathing on it. She was afraid of germs.”

In the documentary, Shari claimed she had spoken to doctors, who believe Joyce’s habits while being pregnant could have had an impact on Jeffrey. As per The Tab, in his 1994 book ‘A Father’s Story’, Lionel blamed himself for not supporting Jeffrey emotionally. He wrote in the book, “As a scientist, I wonder if the potential for great evil resides deep in the blood that some of us may pass on to our children at birth.”

According to an Ohio residential database, Lionel Dahmer, 86, is living in Seville, Ohio and is still married to Shari, 81. The series, a 10-part limited show, will spill the beans on how meticulously Jeffrey used to cut his victims’ bodies and cook their flesh. In a disturbing revelation, the serial killer had admitted that he had so much human flesh to eat that he had even shared it with others. Monster: The Jeffrey Dahmer Story’ is directed by Ryan Murphy, the man who co-created ‘American Horror Story’ series.