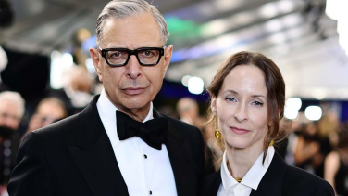 Jeff Goldblum‘s wife, Emilie Livingston, celebrated her birthday with a “surprise” holiday as the actor turned 70. The couple have been married for eight happy years despite their 30-year age gap. Emilie, 39, a former Olympian, planned a trip to Italy in honor of her husband who became a septuagenarian on Saturday, October 22. In a heartwarming Instagram post on Friday, October 21, Emilie asked her husband, “Where do you think we are? Going?” to which she jokingly replied, “I think I misunderstood. I thought we were going to Staples.”

The post was complete with photos and clips of the couple in Italy, set to music, with Emilie revealing how she packed Jeff’s suitcase and planned a trip by train and car to his “surprise destination.” “Now that we’re here living this heady dream it’s even more magical!” Emilie gushed. Jeff responded in the comments section, writing, “Dear what a surprise ??????.” “Happy birthday to my best friend, lover, partner in life, in everything you choose to do, whether for pleasure or for your professional life, I am with you every step of the way!

Jeff Goldblum is 70 years old and Emilie is 39 years old.

Here’s to many more adventures together with our beautiful guys!!! #loveofmylife #jeffgoldblum #maisongoldblum #initaly,” she wrote in the caption. On her Instagram Stories, Emilie also shared a photo of her husband eating a birthday dessert with a beautiful Italian hillside in the background. The former athlete and the ‘Jurassic World Dominion’ actor crossed paths in 2011, announced their engagement in 2014 and finally took holy vows at the famous Chateau Marmont hotel in Los Angeles on November 8, 2014.

This would be the first marriage for Emilie and the third for Jeff, who was previously married to Patricia Gaul and Geena Davis. They have since had two children: Charlie Ocean in 2015 and River Joe in 2017. The couple is said to have met while working out at a local gym. Jeff recalled the encounter in his 2018 interview with Wired magazine. “We were at Equinox on Sunset Boulevard, the gym. I saw her from across a room full of people, walked up to her, ecstatic, and kind of started a conversation,” the ‘Independence Day’ star recalled. The rest was history.

Some would assume that Emilie was attracted to Jeff because of her star power, especially considering that he is over 30 years older than her. However, she apparently had no idea who Jeff Goldblum was, something that surprised the Hollywood heartthrob himself. “I introduced myself: ‘Hello, my name is Jeff Goldblum. I said both names, my first and last name,” Jeff explained to The Times. “Emilie didn’t know who I was. And I still haven’t seen most of my movies,” she added.

It’s worth noting that Emilie was hesitant about marrying Jeff because she wasn’t sure he wanted to get married again. She revealed how opening up to Jeff was “scary” at first after assuming he didn’t want children or be a husband again. “We were honest and conscientious from day one and took our relationship day by day until I had to express my feelings of wanting a family with HIM and sharing the rest of my life with his beautiful soul,” Emilie wrote on Instagram alongside a photo. passionate of the couple kissing in June 2018.

As noted by entertainment outlet Creeto, Jeff and Emilie have been working together since they started dating in early 2011. Not only did the actor show that he wanted to marry Emilie and have children, but he also showed that he loved being a father. . After three years of dating, they were sure they would be a perfect fit to build a family together.