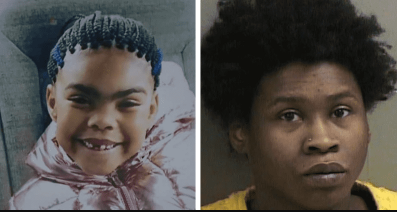 In shocking news, a mother has been sentenced to 53 years in prison for stabbing and killing her 7-year-old daughter as gruesome details of the murder that took place in January 2021 are revealed. Hazel Ivy, 31, was charged with first-degree murder after her daughter, Willow Nevaeh Banks, was found dead in her apartment on Cedar Creek Place.

According to an article in the US Sun, the young woman had sustained multiple injuries, including multiple stab wounds (nearly 24) and blunt force trauma to the back of the head. She had also been strangled, according to the autopsy report.

The murder was discovered after Ivy, 31, sent a photograph of her daughter’s body to an acquaintance. They alerted police, after which first responders arrived at the defendant’s apartment at 3:30 a.m. on Jan. 24, 2021. Ivy opened the door and simply told authorities that Willow was “upstairs,” according to the Network.

Missing Persons Awareness NFP. Willow’s body was found in a bedroom. Later reports reveal that the 31-year-old woman told police that she had “broke”, resulting in the seven-year-old’s death. Detectives discovered blood on Willow’s bed and on the floor in the hallway from her bedroom to her mother’s.

A serrated edged knife was also found in the girl’s bedroom. Autopsy reports also showed a number of injuries sustained by the young woman prior to her death. Speaking to Tri States Public Radio, Knox County State’s Attorney Jeremy Karlin expressed his horror at the tragedy, which he confessed was the “most horrific crime” he had seen in his 30-year long career.

According to sources, Willow was not enrolled in school. Her brother has been relocated by the Office of Children and Family Services. An obituary of the young woman reads: “Willow was a vivacious and outgoing girl, whose smile was contagious.

She loved to sing and dance, a happy girl ready for anything! Willow touched the hearts of many with her joy of life.” We treasure our many memories as the brief gifts they were.” The obituary also reveals that Willow is survived by her parents, Hazel Ivy and Willie Banks, her sister, Destiney Lee Jones, and the Don Yost family.