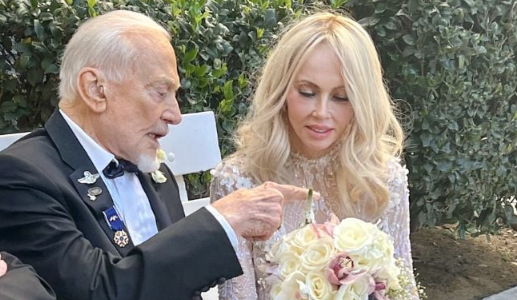 Former astronaut Buzz Aldrin and the love of his life, Anca Faur, have recently tied the knot. The wedding day also marked Aldrin’s 93rd birthday. Aldrin shared the news on Twitter with two images where he poses with his wife and wrote:

“On my 93rd birthday and the day that Living Legends of Aviation will also honor me, I am pleased to announce that my longtime love, Dr. Anca Faur, and I have married. We were joined in holy matrimony in a small private ceremony in Los Angeles and we’re as excited as eloping teenagers.”

In another tweet, Aldrin also thanked everyone for the best wishes on his birthday. He continued:

“It means a lot and I hope to continue serving a greater cause for many more revolutions around the sun!! Onward and upwards and best wishes to all of you too!”

This marks Buzz Aldrin’s fourth marriage, as he has exchanged vows three times in the past.

Born on May 14, 1959, Anca Faur worked for the famous Johnson Matthey science and chemistry company, where she was a Project Manager. She has been employed at Buzz Aldrin Ventures LLC as an Executive Vice President since 2019.

The 63-year-old woman has not revealed anything about her siblings or parents. She finished her graduation from the University of Pittsburgh with a Ph.D. in Chemical Engineering and Catalysis in 1996. She began her career as a project leader at Union Carbide, where she worked for three years.

She then joined Johnson Matthey Fuel Cells in July 2020 and has worked as a program manager for 20 years. She previously served on the board of the California Hydrogen Business Council and attended the 70th International Astronautical Congress of the American Institute of Aeronautics and Astronautics.

Faur also attended the XXXII Space Exploration Association Planetary Congress and Astronaut Meeting in Houston, Texas in October 2019 and she is also active on Instagram with around 568 followers.

The astronaut first married Joan Archer in December 1954 and became the father of three children. The couple divorced in 1974.

He then married Beverly Van Zile in December 1975 and they remained together for three years until 1978. Aldrin’s third marriage was to Lois Driggs Cannon in February 1988. They were married for 24 years, separating in 2012.

Buzz’s relationship with Anca Faur has gained recognition due to their 30-year age difference. They were seen together on several occasions before recently getting married.

The 93-year-old man was part of the Apollo 11 space mission along with Neil Armstrong and Michael Collins. He became one of the first people to walk on the moon. Armstrong passed away in August 2012, and Collins died of cancer in April 2021.