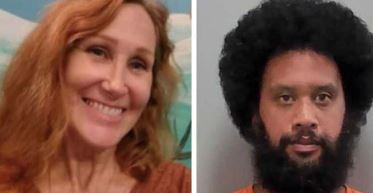 A man charged with the murder of a 57-year-old woman whose body was recovered in March from a septic tank on her property was sentenced Tuesday, Aug. 16, to three consecutive life terms in prison. Keoki Hilo Demich, 34, was found guilty of charges including first-degree murder, burglary with assault or battery, sexual assault with great force, and grand theft of a motor vehicle in the death of Cynthia Cole. at the beginning of this year.

Demich reportedly referred to Cole as a second mother to him, The US Sun reported. Cole, the mother of her own three children, was reported missing in late February after she never returned home from a Jammin’ Jensen event in her hometown. Florida police have issued a missing person alert for the 57-year-old woman and her gray Jeep Cherokee. On March 5, after days of searching and investigating, investigators made a tragic discovery when they found her body submerged in a septic tank four feet below ground. Police spent days digging outside her house before they were able to recover her body.

Demich, who investigators said worked as a handyman for Cole, was sentenced immediately after his guilty plea in Circuit Judge Sherwood Bauer’s court to life terms on each of the first three charges, which will be served consecutively, and lesser time on the other charges. Bauer, in instructing Demich about serving life without the possibility of parole, noted it “means that there’s only one way you’re going to leave prison, which is when you decease of old age or some disease.”

Prosecutors declared their intent to seek a state execution for Demich, of Stuart, a day after a Martin County grand jury on May 17 indicted him of first-degree murder in the homicide of Cole, court records show. Bauer said the actions Tuesday mean the state waived the notice to seek the death penalty. Demich, wearing an orange jail outfit and chained around the waist, stood as three of Cole’s children addressed the court.

Assistant State Attorney Nita Denton read a statement indicating Demich went to Cole’s home, which was in Jensen Beach, intending to rob and kill her. “When he arrived at her home, she was not there, and he laid in wait until she arrived home,” Denton said. “When she arrived home he continued to wait and hid in the shower contemplating how he was going to kill her.” Denton said he slammed her into a front door and, believing she was unconscious, sexually battered her. “The defendant then moved the victim to the bathroom where he drowned her and then proceeded to sexually abuse her again,” Denton said. Demich then put Cole in the septic tank.

Cole’s daughter Ashley Bevensee said that she met Demich many times, with him even saying that Cole was “like a second mother to him.” She reportedly found Christmas cards from Demich saying that he loved her and was thankful to have her in his life. “I will never understand how you do this to someone who you call a second mother,” Bevensee said. “I find myself looking behind my shower curtain like I’m a little kid again, looking for monsters under my bed. It has broken my family and after we have already lost our father nine years ago, if I ever get married, neither of them will be there to see it.”

Cole’s friends reported her missing after she disappeared on February 24 and she was not posting on social media, which was unusual, investigators were told. She was last seen alive at Jammin Jensen, a street party held on Thursday nights. Investigators determined Demich had been a “longtime friend” of Cole’s, and he was interviewed several times before and after her body was discovered, records show.

Detectives reported that Demich made various statements about his activities the night and morning that Cole disappeared “that were determined to be false.” Chief Medical Examiner Patricia A Aronica concluded Cole’s death was a homicide caused by “blunt force” injuries to her head, torso, and extremities. Along with lacerations to her head, Cole’s nose was fractured, several ribs were broken, and contusions were found on her arms, thighs and leg. There also was “evidence of asphyxia,” Aronica reported, including a fracture to the bone in the neck that supports the tongue and contusions of the neck and chin.

Read Also: Who was Roger Pinckney? Wiki, Biography, Age, Family, Cause of Death