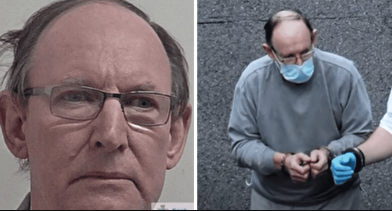 A necrophiliac killer, currently serving a life sentence for strangling and murdering 2 women and sexually assaulting the corpses of 102 other women, has now been charged with 16 more crimes. David Fuller, 68, was sentenced to life in prison last year for beating and strangling Wendy Knell, 25, and Caroline Pierce, 20, to death in two separate attacks before sexually assaulting them in Tunbridge Wells, Kent. , in 1987.

Fuller, who was jailed in December 2021, even filmed himself abusing and assaulting the corpses of women, including a nine-year-old girl, two 16-year-old boys and a 100-year-old woman, over the age of 12. For the retrial, Fuller appeared at Medway Magistrates Court on Thursday, October 6 via video link. He has not pleaded guilty to all 16 charges.

The new charges against the “necrophiliac killer” include sexual penetration of a corpse, possession of an extreme pornographic image involving sexual interference with a corpse, and making indecent images of children’s bodies. Fuller will now appear in court in Medway on November 3.

Necrophiliac killer David Fuller, serving a life sentence for killing two women and sexually abusing 102 female corpses, appears in court to face 16 new sex charges https://t.co/g0ATdSFumq pic.twitter.com/PWQKcJUcAX Fuller was sentenced to life in prison after admitting to sexually assaulting a female corpse while working as an electrician at Kent and Sussex Hospital and Tunbridge Wells Hospital in Pembury.

He pleaded guilty to the murder of Knell and Pierce, as well as 51 other crimes, including 44 counts related to 78 victims in morgues between 2008 and November 2020. Fuller’s crimes came to light after investigators linked him to one of Britain’s longest unsolved double murders more than 30 years ago.

Investigators linked Fuller to the 30-year-old case with the help of a DNA breakthrough before recovering the stash of his gruesome videos of himself abusing a corpse. The latest charges against Fuller purchased by Kent Police on Tuesday, October 4, are connected to the remaining 23 victims.

The agents carried out a complex identification process with which they were able to identify 13 of these 23 victims. Police are still unable to establish the identities of 10 victims, but the new charges against Fuller reflect offenses against all of them.

Kent Police said: “An investigation by the Kent and Essex Serious Crime Directorate has led to evidence relating to a total of 101 victims in these mortuary settings. The latest charges relate to the remaining 23 victims, all deceased adult women. . They cover a period between 2007 and 2020.”