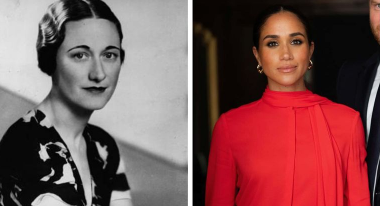 The Duchess not only had a Simpson-like smile, but she also wore the entire red outfit with gold earrings strikingly similar to hers. Misan Harriman, a well-known celebrity photographer, recently shared a couple of photos on social media, focusing on the Duke and Duchess of Sussex on Tuesday, October 4. The first photo was of Meghan in a blood red blouse with a long bow. slung over the shoulder of the Another Tomorrow brand. However, that wasn’t the only image that looked so much like the Duke and Duchess of Windsor.

In the photo shared by Harriman, Meghan and Prince Harry pose together holding hands and making direct eye contact with the camera, smiling the entire time. Another photo Harriman shared of the Sussexes was a replica of Simpson and Edward.

Harry and Meghan strike a similar pose in which only their left profiles are captured in monotonous light. According to The Daily Mail, Anna Pasternak, author of ‘The American Duchess’, claimed that Meghan’s outfit was heavily compared to Simpson’s. However, this was not all that was similar between the two.

Even Harry and Edward had many similarities. Edward is known to have left his throne to marry a commoner, Simpson, much like Harry’s decision. Furthermore, both Simpson and Markle were former American actresses and also divorced.

Royal author Hugo Vickers had even stated that Harry “radiated the same sadness” as Edward, given that they both stepped away from their royal duties to be the person they love.