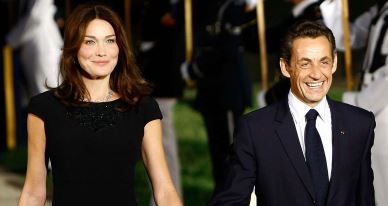 France’s former first lady Carla Bruni, 54, showed off her toned physique topless in a candid photo shared on her Instagram. Carla Bruni looked flawless as she posed for a photo taken by her husband, former President Nicolas Sarkozy. She wrote below the aesthetic-looking photo, “Derniers rayons,” which translates to “Last Rays” in English.
The Franco-Italian beauty stood on a balcony with a stunning ocean view from a sunny tropical location as she posed.

opless with her arms above her head. She looked amazing with a semi-sheer black sarong around her waist. Her long brunette locks fell loose as the singer and model turned their backs on the camera in the bold snap. Carla Bruni is married to former French President Nicolas Sarkozy, who was in power from 2007 to 2012. Carla has admitted that she entered therapy to address her fear of commitment and considers her marriage to former French President Nicolas Sarkozy to be an “accomplishment”. ”

It comes after the beauty admitted she goes to “indescribable lengths” to maintain her good looks. She revealed that she works out for two hours a day and practices a strict regimen of elliptical trainer, Pilates and barbell exercises to “stay slim”. Bruni said that she had no particular relationship with beauty, but that she prefers grace and charm to “pure beauty”. she said, “I may have a silhouette and a style, but I go to untold lengths to stay slim: two hours of exercise a day, some barre, elliptical, some Pilates.” Speaking to French magazine Madame Figaro, the singer and model opened up about returning to the Balmain catwalk and posing for one of YSL’s recent campaigns, confessing that she feels “too old” to model and feels “strange” when realizing that she is old enough to be the other models’ moms. she an inconvenience too,” she added, saying she felt “destabilized” returning to modeling in campaigns for YSL and Balmain after a long hiatus.

Reflecting on her early years, the model said that she felt tall and lanky and felt invisible. She talked about her late puberty that made her appreciate the looks she had on the beach when she was 17 years old. She admitted that she likes to “seduce and please people, but without a sexual purpose”, and said that pleasing others is more interesting than beauty, which fades with age. The singer, who focused on her music and philanthropic pursuits while living at the Elysee as First Lady of France from 2008 to 2012, made a splash when she walked the Balmain catwalk in 2021. She also starred in YSL’s spring-summer photo campaigns, showing off her age-defying physique in revealing outfits. She said that she still loves fashion and considers it a second family. Speaking of her marriage to Nicolas Sarkozy in 2008, she said it was important for her to get married.

The model admitted that she used to have difficulty bonding, but she thanked therapy for helping her cope with these issues. She said that psychoanalysis helps people discern what comes from themselves and from others. Speaking of her 10-year-old daughter Giulia de ella, after sharing a photo of her on Instagram, the model said she hoped to set a good example of her. Carla, who also shares her son, Aurélien, with French radio host Raphaël Enthoven, added, “that well-behaved adults usually raise well-behaved children.” She said that her favorite traits were kindness and generosity and that although she calls herself mother hen, she doesn’t want to control her children. She said that she is trying to be a present mother to her children and support them as best she can.

Read Also: Who was Deborah Martinez-Garibay? Wiki, Biography, Age, Family, Cause of Death