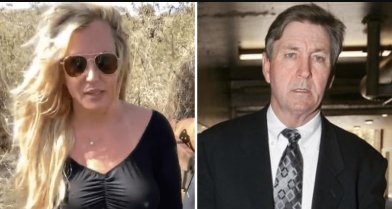 Britney Spears’ conservatorship may have ended in November 2021, but that doesn’t stop the singer from continuing to speak out against her father Jamie Spears, and even her mother Lynne Spears. The ‘Toxic’ hitmaker took to her Instagram over the weekend and took out her frustrations on her parents wishing they “both burn in hell.”

The award-winning singer shared an audio clip on Instagram of her with her over 40 million followers as she reflects on the “pain” her father inflicted on her during her guardianship of 13 years. Along with a detailed caption, Britney in the audio note explained how she continually had to undergo MRI exams without being told exactly why she needed the procedure. Britney shared how she underwent the hour-long scan at least three times, which led her to believe that she might be suffering from a rare form of cancer.

Taking a dig at her parents, Britney, while sharing the audio note, opened up about the pain she experienced in a detailed caption. “I’m sorry, I’ll never forget it for the pain and the difference of being out of my head, clearing my head moving my feet… it’s only been 10 months since the conservatorship ended,” the 40-year-old singer said.

She continued, “I wouldn’t wish that kind of pain on anyone! It is extremely difficult for me to accept the fact that my family did that to me… it will be difficult for me for the rest of my life,” adding, “As for my mom and dad, who sat down and hid the coffee in the house to wake me up from feeling dead and scared like an old lady and he dumped me I’ll say it loud and proud I pray they both burn in hell.”

In the audio clip, Britney Spears delved into her father Jamie Spears, saying, “Basically, she was a little confused. So honestly, none of that was true. I’m fine. I am alive. The bottom line, the hardest thing is that they were just being mean. My dad was being really mean and I really felt like my dad was just trying to kill me and I really hope he burns in fucking hell.”

Britney after the tirade shared a nude photo of her with nothing but a heart emoji covering her buttocks. In the post, she said, “I’m pretty traumatized for life and yeah I’m f*cked up as shit and no I probably won’t act again just because I’m stubborn and I will.” My point.” The latest comes after Britney Spears expressed her frustrations about her children continuing to avoid her.

In her Instagram video, the singer criticized her son for “claiming that ‘she’s no good now’ and she ‘she wants attention.'” “Yes, I want to be heard and I’m angry,” Britney said, adding, “I want to unconsciously offend people because they’ve offended me for so long, but I’m afraid to let them know that I’m not willing to see them until I feel valued.”