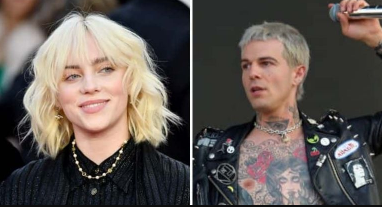 20-year-old pop star Billie Eilish is currently the subject of rumors that she is dating 31-year-old alternative rock singer Jesse Rutherford. This weekend, a TikTok video purportedly showing Billie and the ‘The Neigbourhood’ singer emerging from a haunted maze at Halloween Horror Nights in Los Angeles on Friday night, went viral online. In the video, the two can be seen holding hands and walking with a group following them. they are dating now.

While it’s hard to make out Jesse or Billie’s faces in the video, there’s no doubt it’s the two of them, as the internet has already retraced their steps and they were both there last night wearing the exact same clothes as in the video. Social media did not take it kindly. While the 11-year age difference alone may not seem like a big deal, Twitter users point out that Billie and Jesse have known each other for a long time.

For them, this makes this potential relationship even more problematic. Since she rose to fame, Billie has been linked to various guys, but she has never really accepted anyone publicly. She said that she prefers to keep her personal affairs, especially her SO, private due to the frenzy that ignites when the public finds out about her romantic relationships.

A Jesse Rutherford fan account tweeted images of Billie and Jesse playfully posing next to each other at a Halloween party on December 18, 2017. The tweet was first sent in 2017 when Billie was 15 and Jesse was 26. . It has resurfaced through TMZ. A lot of people find it offensive because Jesse met Billie when he was underage, but he is supposedly dating. Many people found it disgusting and “weird”.

One Twitter user said: “Jesse Rutherford and Billie Eilish seen holding hands is literally the worst thing that’s ever happened to me the universe is literally against me that’s so horrible.” Another commented saying, “Jesse Rutherford has known Billie Eilish since he was 15 and then dating her is f*cking weird!” One fan of The Neighborhood said she was ‘devastated’ by the news:

“Jesse Rutherford is too old for Billie Eilish and made worse by the fact that he met her when she was just 16. The Neighborhood is one of my favorite bands but it seems I’m about to stop listening to them. I’m so devastated. I hope Billie knows what she’s doing.” Another fan wrote: “Apparently Jesse Rutherford (31) is dating Billie Eilish (20, who he knows she was 15).

I’m sorry but if they really are together then it’s weird and there’s a word for him that starts with g”. and ends with roomer.” Another usage read, “Jesse Rutherford (31) dating Billie Eilish (21), who he’s known since she was 15, is so weird and troublesome.” Jesse, best known for being the lead singer of The Neighborhood, previously dated a model named Devon Lee Carlson. They started dating in 2015, but rumors surfaced in November 2021 that their relationship had ended.