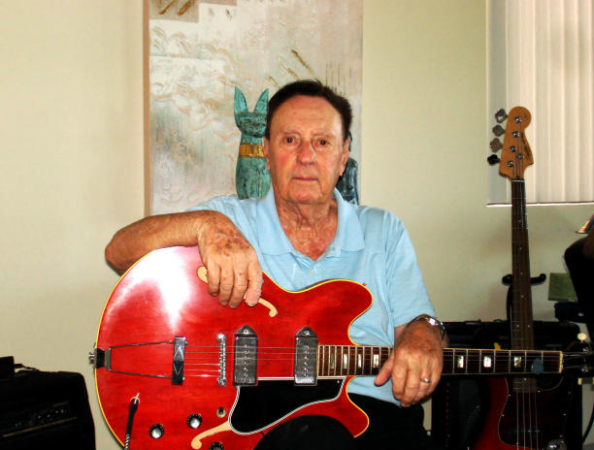 Well-known session guitarist Bill Pitman, a member of the group Wrecking Crew, has just passed away at the age of 102. Pitman died on August 11 at his home in La Quinta, California, according to The New York Times. According to his wife, Janet Pitman, he died under hospice care after injuring his spine in a fall.

Pitman was born on February 12, 1920, and grew up in a family of musicians. His father was a bass player on the NBC staff for shows. Bill Pitman first became interested in music when he was five years old, and during high school, he frequently traveled from New Jersey to Manhattan to experience the city’s jazz culture.

He also served in the Army during World War II and later moved to Los Angeles. In the 1950s, Bill Pitman began performing in Los Angeles jazz clubs when he was 31 years old. After landing a regular gig in Peggy Lee’s backing band, he gained notoriety. Pitman spent three years as a frequent performer on The Rusty Draper Show radio show after that.

Pitman’s well-known compositions include his work on the Beach Boys’ Good Vibrations, the Ronettes’ Be My Baby, Bob Dylan’s Mr. Tambourine Man and Barbra Streisand’s The Way We Were.

Bill Pitman began working as a session artist in 1957.

The 1958 song To Know Him Is To Love Him by Spector was the first hit for the band Wrecking Crew. Pitman quickly became in demand by Capitol Records and other Los Angeles artists after releasing the song.

In addition, he made contributions to several films, including Blue Hawaii, a 1961 Elvis Presley film, as well as M*A*S*H, Fast Times At Ridgemont High, Dirty Dancing, and Goodfellas (1990).

In 2008, Pitman appeared in the documentary The Wrecking Crew, where he discussed his work with the loosely organized band of musicians.

Additionally, he provided music for Fast Times at Ridgemont High and Goodfellas, as well as several commercial jingles and movie soundtracks. Throughout the 1970s, the artist also toured with the likes of Vicki Carr and Burt Bacharach. The main band at the MGM Grand Hotel also included Bill Pitman.

The artist retired in 1989 but kept his love of playing music private.