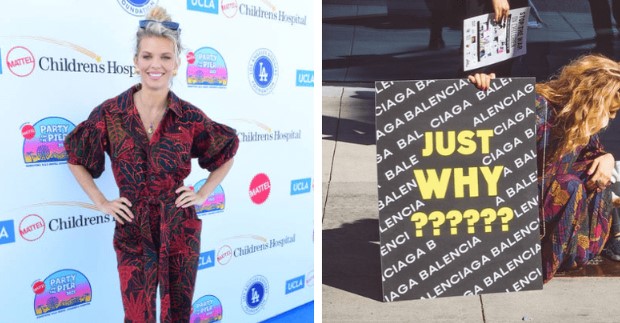 AnnaLynne McCord, an outspoken ‘Nip/Tuck’ star, recently organized a protest against European fashion label Balenciaga after the luxury label controversially used teddy bears in an advertisement. McCord, 35, was flanked by a dozen other protesters outside one of Balenciaga’s flagship stores in Beverly Hills on Saturday, December 3, and at the same time, parallel protests were taking place in London and New York City.

McCord was holding a sign that read, “Why?????” with the Balenciaga emblem in the background. Other protesters carried banners reading: “Protect our children” and “Pedophilia is out of fashion.” McCord posted on her Instagram page Thursday that she would be organizing the protest. She wrote: “If you are against the sexual exploitation of children and would like to join, we would love to have you!”

In a September 2019 People interview, McCord opened up about the sexual assault she experienced when she was young. At 11 a.m. local time, she started the protest with the help of the activist group Mom Army. Twenty protests were held on December 3 in 20 cities, according to a Mom Army statement.

AnnaLynne McCord is an actress, humanitarian, and spokesperson who originally rose to fame in 2007 as the conniving Eden Lord on the FX television series ‘Nip/Tuck.’ Since then, she has become known for playing foxes, vampires, and characters of a darker bent.

She received much praise for her portrayal of a troubled and delusional girl in the 2012 film ‘Excision’, which earned her the ‘Best Actress’ award at the 2012 Malaga International Fantastic Film Week. McCord has donated to numerous charities in her spare time and says doing so has taught her how to save herself.

She says that working with charities and giving back has been her saving grace. She is the president of Together1Heart, an organization that helps girls and boys who have experienced sexual assault and human trafficking.

McCord received a 2009 US Congressional honor from Connecticut Congresswoman Rosa De Lauro for her efforts to combat trafficking. In an interview with House of Influence’s ‘In The Zoom Room’ interview series, the ‘90210’ star also opened up about her experiences with sexual assault and abuse as a child.

As quoted by the Independent, McCord said in the interview: “I come from horrible abuse. I grew up going through all these horrible things that… caused me absolutely terrible pain.” She added, “The truth is, we are neither good nor bad.