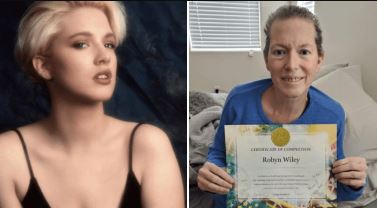 Robyn Griggs Wiley has reportedly died at the age of 49 after a long battle with cancer. Griggs passed away just two days after it was announced that she would be entering hospice care. The actress appeared on ‘Another World’ after a two-year stint on ‘One Life to Live’. The soap opera star returned to acting after a brief hiatus, taking on roles in such horror films as ‘Ghost Tour’, ‘Minds of Terror’, ‘Demon Hunters’, ‘Dead Clowns’ and ‘The Absence of Light’. Last year, however, she revealed that she had been battling stage 4 adeno-endocervical cancer.

Griggs shared in an update just a few weeks ago that she had four new tumors and that she would be undergoing chemotherapy treatments. In another update on Facebook just two days ago, her team shared: “It is with deep sadness that we share the news from Robyn’s father that Robyn will enter hospice today or tomorrow.” The post added: “She has fought with determination, strength and grace that is nothing short of inspiring.”

The tragic news of the star’s passing was shared on her social media accounts on Saturday, August 13. “It is with a heavy heart that I am saddened to announce Robyn’s passing. However, she is no longer in pain and wants us to remember that and good memories,” read a post on Griggs’ Facebook page. “I will never forget how open she was to telling her story and accepting me helping her tell it. She wanted to help people and spread her story to do so. I was honored to do so. RIP my friend, I love you and smile when I think of you.” you”.

Griggs’ best friend posted another tribute on Instagram. “This is Robyn’s best friend Sue from the last 29 years and I wanted to post this beautiful selfie that Robyn took and sent to me while we were on one of our long phone conversations in May 2020. This was taken just before she she began to have symptoms of illness. To any of you who knew her personally like me, she was indeed the kindest girl and woman. She was a sunflower. R.I.P. my dear friend. I love you forever.”

Born in 1973, Griggs began her career as a child actress in stage productions before appearing on Nickelodeon’s previous series ‘Rated K’. She then went on to star in two major soap operas, playing Stephanie Hobart in a couple of episodes of ‘One Life to Live’ and Maggie Cory in several episodes of ‘Another World.’ The actress’s stints on both shows ran from 1991 to 1995. In the 2000s and early 2010s, she starred in videos and movies including ‘Minds of Terror’ and ‘Hellweek,’ among others.

Griggs, who had been married to professional golfer Mark Wiley since 2013, was diagnosed with stage four endocervical adenocervical cancer, a type of cervical cancer that is usually terminal, in the fall of 2020. She underwent surgery to remove the cancer and spent the following year doing interviews to tell her story and raise awareness. Last month, however, she shared that four new tumors were found and that she was entering chemotherapy once again. She tragically succumbed to the disease, but fought it off with grace and determination.