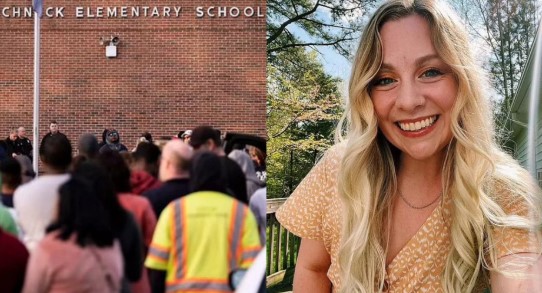 Abby Zwerner, a teacher at Richneck Elementary School in the city of Newport News, was seriously injured after being shot by a 6-year-old student. While the incident left the community in shock, Newport News Police Chief Steve Drew confirmed that the shooting was not accidental and came after an alleged altercation between the student and the educator: the teacher, who initially remained in anonymity, he was immediately taken to a local. hospital.

Mayor Phillip Jones later confirmed to the BBC that Zwerner’s recovery “was trending positively”. However, he said that she remained in “critical condition”. Authorities did not confirm the type of weapon used in the shooting, but did mention that it was a pistol. Details about how the boy obtained the gun have not yet been made available to the public.

Chief Drew shared that officers put in place a specific system for sending children to their parents by dividing them up based on their grade level: He also mentioned that there were “a lot of counselors” available to help students with the traumatic event.

The Richneck Elementary School educator who was seriously injured after being shot by a 6-year-old student has been identified as Abby Zwerner. She is a first grade teacher at the institution.

According to local news, Zwerner is 25 years old and a student at James Madison University (JMU). She is from Williamsburg, Virginia. Following the incident, JMU President Jonathan Alger issued an official statement wishing Zwerner well: Twitter user Angelina Clapp, who has been friends with Zwerner since their student days, said that she is an “incredible, sweet person.” “He didn’t deserve to go through such a situation.

Meanwhile, Steve Gonzalez, a father whose son was present in Zwerner’s classroom at the time of the shooting, told Fox News that the latter acted “selflessly” during the incident and yelled at other children to “run away” afterward. of getting shot. According to WAVY, Zwerner was shot in the chest and remained under treatment at Riverside Regional Medical Center.