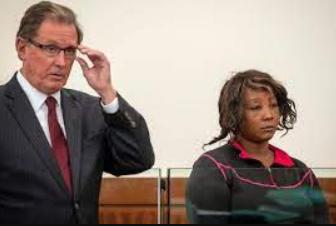 She was also charged with two counts of arson of a dwelling, two counts of assault and battery with a dangerous weapon and one count of assault and battery with a dangerous weapon causing bodily injury. Ngoiri pleaded not guilty to all charges on Friday. The fire was reported in the three-story six-family home at around 3:31 a.m. m. of May 14. at 4 p.m. m. that day, firefighters were still on scene attempting to complete a full search of the building and address any remaining hot spots.

Four residents died as a result of the fire, including Joseph Garchali, 47; Christopher Lozeau, 53; Vincent Page, 41; and Marcel Fontaine, 29. Their causes of death were related to smoke inhalation and thermal injuries, according to the prosecutor’s office. Another resident was seriously injured after jumping from a window to escape the fire and two other residents were taken to hospital to be treated for smoke inhalation.

Court records show Ngoiri was in court on May 18, just four days after the May 14 fire at 2 Gage St., for a probation violation hearing in connection with a November assault and battery case. 2019. Ngoiri was found to be in violation of his probation after failing to complete an anger management program and failing to meet required tests, according to court documents. Ngoiri was held without bail and is due back in court on November 29.