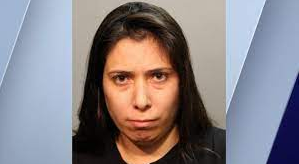 A 34-year-old aunt has been charged with the attempted murder of her three-year-old nephew after she allegedly threw him off Chicago’s Navy Pier into Lake Michigan. Victoria Moreno, 34, will appear in court Wednesday on charges of felony attempted first-degree murder and felony aggravated assault on a child, while the child remains in the hospital fighting for her life.

The chilling incident unfolded around 1 p.m. m. Monday when police said surveillance footage captured the suspect pushing her nephew to the end of the pier before dumping him into the lake. A law enforcement source told WGN that Ms. Moreno did not attempt to rescue the boy, who was pulled from the water by authorities around the 700 block of East Grand Avenue.

The young man went into cardiac arrest and was rushed to the city’s Lurie Children’s Hospital, police said. He is currently on life support and is not expected to survive. The Chicago Police Department has not officially confirmed the relationship between the suspect and the victim, but a source confirmed to WGN that Moreno is the boy’s aunt. The 3-year-old had been in his grandmother’s care that day when his aunt snatched him from the house when the grandmother briefly walked up the stairs, according to authorities.

Ms. Moreno initially told investigators that she was just a witness to the incident, then she later said that she had been holding the boy by his shirt and dropped him into the water, a source said.
As with any incident involving children, these are difficult circumstances. We ask that you keep the family in your thoughts,” said Area Three Deputy Director Gabriella Shemash.

The victim’s family is now under investigation by the Illinois Department of Children and Family Services, spokesman Bill McCaffrey said. He said the department had no prior contact with the family. In a statement, Navy Pier officials said: “Navy Pier is deeply saddened to learn of the injury to a child pulled from the water this afternoon. We are working closely with the Chicago Police Department as they investigate the incident. Our hearts go out to the boy and his loved ones.”