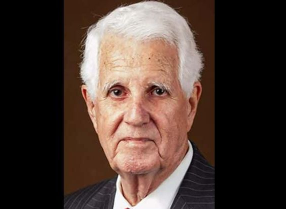 Tom Emberton, a former Kentucky Republican gubernatorial candidate and later chief judge of the state Court of Appeals, died in a fire at his home on Oct. 20, 2022, according to authorities. Emberton’s home caught fire around 3:30 a.m., Metcalfe County Coroner Larry Wilson said. Wilson said Emberton helped get his wife Julia C Emberton out of the house before going back in and being unable to get out.

Emberton was 90 years old. Leigh Anne Hiatt, a spokeswoman, stated that Kentucky Chief Justice John D Minton Jr announced Emberton’s death in his State of the Judiciary address, according to US News. The fire, according to Edmonton Mayor Doug Smith, was not intentional. “Tom heroically made sure his wife Julia got to safety, but he lost his life during his effort to save her home,” Smith told WBKO-TV.

Tom Emberton and his wife Julia were reportedly married for 65 years. The couple had two children, Tom Emberton Jr and Laura Emberton Owens, and five grandchildren. Emberton was reportedly a Metcalfe County attorney who campaigned for governor in 1971 and was elected to serve on the Court of Appeals in 1987. Until his retirement in 2004, he was re-elected twice and served as Chief Justice of the appeals court, according to Mitch McConnell, head of the US Senate Republican Party.

“Tom gave me one of my first experiences in the harsh and tumultuous reality of political campaigning, hiring me to work on his campaign for governor of 1971,” McConnell said, according to the New York Post. “He taught me valuable lessons about public service and how to run as a state Republican in Kentucky,” the leader added. Emberton served as a member of the Public Utility Commission during the Nunn administration before running for governor.

In 1980, Hal Rogers of Somerset in Pulaski County, who now holds the seat, won the primary over Emberton in Kentucky’s 5th congressional district. Emberton was chosen by Democratic Governor Wallace Wilkinson to serve on the Kentucky Court of Appeals in 1987. Until his retirement in 2004, he served in that role. Emberton resided in Edmonton, the county seat of Metcalfe County in southern Kentucky.

He was born in Tompkinsville, Kentucky in 1932. He attended Western Kentucky University before enrolling in the University of Louisville School of Law, where he graduated in 1962 and subsequently enrolled in law school. From 1966 to 1967, he was a Metcalfe County prosecutor.