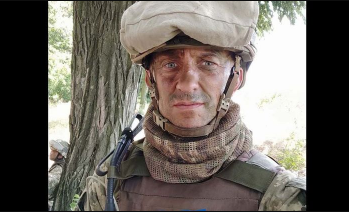 BEDFORDSHIRE, UK: 48-year-old soldier Shaun Pinner, who was captured six months ago while fighting for Ukraine during the Russian siege of the port city of Mariupol in April and was sentenced to death in June by a Russian deputy court in eastern from Ukraine. , he returned home to the UK with his family on September 22. He said, recounting his dark days in Russian-controlled Donetsk: “I thought he was going to die. It was hell on earth.”

Speaking to The Sun, Pinner said: “The last six months have been the worst days of my life.” “I never want to hear an ABBA song again or see a loaf of bread. I’m so lucky to be home,” said Pinner, who survived on bread and dirty water and was forced to listen to heavy metal band Slipknot and ABBA. that played 24 hours a day on a loop. He further said: “I was surrounded by Russian separatists. They stripped me naked and stuck a knife in my thigh for no reason. They beat me out of daylight for 20 minutes.” Pinner was electrocuted for 40 seconds each time. “It was a fierce shock. It seemed like they were just doing it for fun,” he recalled.

After Russia launched a full-scale invasion of Ukraine on February 24, Pinner married Ukrainian Larysa. Following this, Pinner, who previously served in the Royal Anglian Regiment and joined the Ukrainian Army as a contract soldier, went to the Donbas region to confront pro-Moscow separatists. However, he was captured in April.

“I knew it was bad, so I called my wife and gave her my death message. But she didn’t even cry. She just yelled at me that I was a warrior and that I would survive. Those were the last words I ever heard from her and me.” kept going. It turned into a carnage when the Russians ambushed us with mortar shells and artillery. There were so many bodies it looked like something out of a zombie apocalypse,” he described and further discussed the torture saying, “One of the guards said he I was going to kill and send the video to my mother. My wedding ring was cruelly stolen. It was my darkest day.”

In June, Pinner and Aiden Aslin were sentenced to death. They were accused of being mercenaries, violent seizure of power and receiving training to carry out terrorist activities. Pinner thought his execution was nearing, instead he was told to pack his things and was part of a prisoner exchange brokered by Roman Abramovich, according to the report. He “he said he was working with humanitarian aid. We took a picture with him and I asked him why he didn’t buy West Ham and he said that Chelsea was closer to his house. He really saved my life.”