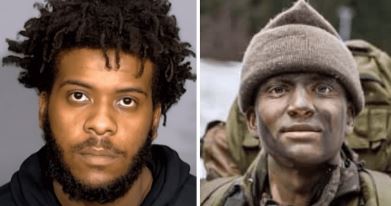 On Saturday, August 27, a Dutch soldier, Simmie Poetsema, was killed and two others were wounded in a fatal shooting that occurred in downtown Indianapolis. Soldiers who had been training at a southern Indiana boot camp ended up in a fight with a group of men that resulted in a devastating incident. Shamar Duncan, 22, an Indiana man was arrested Tuesday, August 30, for killing the soldier and wounding two others. He was charged with one count of murder, two counts of attempted murder and disorderly conduct in the shootings on Thursday, September 1.

According to DailyMail, the arrest affidavit states that Duncan told one of his friends that he opened fire on the soldiers because he “just took a shit.” The soldier who was killed by Duncan is identified as a 26-year-old member of the Dutch Commando Corps, Simmie Poetsema. He was affected by serious injuries and died while “surrounded by family and colleagues” on Monday, August 29, according to an official statement from the Dutch Ministry of Defense. The official statement from the Netherlands Ministry of Defense further revealed that US Defense Secretary Lloyd Austin expressed his condolences in a telephone conversation with Kajsa Ollongren, the Netherlands Defense Minister.

He also promised to provide any necessary assistance in the investigation of the shooting. Ollongren later told a meeting of European Union defense ministers in Prague: “We do a lot of training of our military in the United States, and we don’t really expect this to happen. So it’s very, very worrying for us.” An anonymous witness also told police investigating the case that Duncan and his two friends were “looking for trouble” and crossed a street and pushed a man later, his group got into a fight with soldiers.

Additionally, three detectives from the Royal Netherlands Marechaussee traveled to Indianapolis to gather information about the incident. Additionally, Dutch Defense Minister Kajsa Ollongren also raised concerns about gun violence in the United States after the shooting. During a news conference, Marion County Prosecutor Ryan Mears said, “I hope that no one interprets this as the end of the investigation or that additional charges are not filed against other people in the future,” Mears said. evaluate the conduct of all involved.

“Always remember there are two sides to a story,” said defense attorney KiKi Gaither. He further added, “Clearly, things got out of hand. And it comes down to, you know, who you believe in.” Indianapolis Metropolitan Police Department Deputy Chief Kendale Adams stated that he is in constant contact with investigators in the Netherlands. “We’ve been in constant contact with them in terms of what they need,” Adams said. He further added, “That will continue even after today.” Investigators used statements from surviving soldiers, witnesses, bystander video and surveillance video to identify Duncan as the shooting suspect, according to the affidavit.