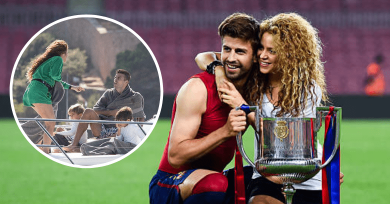 The breakdown of the relationship between Shakira and Gerard Pique has dominated headlines for quite a few months. Now, months after the duo confirmed their split, new photos have emerged of what appears to be an explosive argument in front of their two young children.

A couple of photos taken from what appeared to be one of the family’s last vacations have gone viral on the internet. One of the photos shows the Colombian pop star standing over the FC Barcelona defender as he sat between their two children Milan, 9, and Sasha, 7. The exes appear to be on a luxury yacht while on a holiday, but it’s unclear if the photos were taken earlier this summer.

Shakira is 45 years old and Pique is 35 years old.

As reported by Marca, the sensational photos show the singer pointing a finger at the soccer star as he was apparently trying to make a point. Piqué also seems to be saying the piece about him. In another photo, he is seen walking away as his wife continues to speak.

The world famous couple officially announced their separation in June this year, after almost 12 years of a relationship that had two children. There has been a lot of speculation since the split about what really happened, but Pique has made it clear that he has moved on with his new girlfriend, Clara Chia Marti. Many believe that the footballer began dating the 23-year-old model when he was still with the singer.

Sources assured that Clara Chia was also in a relationship when she met Piqué and that both continued their relationship behind the back of their partners. The cheating allegations were eventually linked to photos of the argument that recently surfaced on social media. Last month, a source told The Sun: “Gerard and Clara have been seeing each other for months. She is a student who also works for him in his office, organizing events. They have kept quiet about their relationship, but everyone around them knows what is going on.”

Although the separation has been confirmed, so far no legal movements have been made regarding the custody of the couple’s children. MEAWW previously reported how Shakira wants to take her two children to Miami and is not budging from that position. Her plan is to leave Barcelona and relocate the family to the United States. However, Piqué is very much against the children leaving Barcelona since it is in the Catalan capital where they have spent most of their lives and where they have their friends, family and school.

“Piqué opposes [the move] because his family, his friends and his activities are here and he is not going to go to Miami,” journalist Jordi Martin told the Spanish outlet ‘Socialite’, adding: “Shakira is really against because the children have already started the current school year. Martin said that Shakira would have to wait at least a year before she could bring the children to Miami.