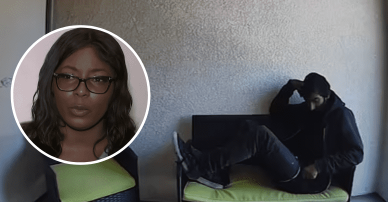 A homeowner is concerned for his safety and says police have “done nothing” to remove an uninvited homeless man sleeping on his porch. Shacola Thompson, who lives in Van Nuys, said the homeless man has made himself comfortable on his patio furniture about 10 times this month. He first realized something was wrong after noticing graffiti on his porch near Hazeltine Avenue and Sherman Way. When she glanced at the front door camera, she saw the intruder lounging on her outdoor couch. “He came to my house yesterday morning and tried to break in. I’m worried about my safety,” Thompson told ABC 7.

He might break in. It could hurt me. He could sneak into my house. It’s not fair,” she added. Surveillance footage outside his home captured every time police arrived to confront the man. “Yesterday he told the police that he lives here and he doesn’t live here,” Thompson explained. “I feel like they’re not taking this [sic] seriously. They’re not taking my safety seriously. I live here. I’m on my own.” The homeless man was questioned and released, the Los Angeles Police Department told the Daily Mail.

Thompson said he first noticed the man standing on his porch as he was leaving for work one morning. She said she has pleaded with authorities several times to arrest him for showing up on his doorstep. “Do you know this individual?” an officer previously asked Thompson through the camera. “I don’t know him,” she replied. “I don’t know this guy. He’s been poking around here. This is the second time I’ve had to call him to check him out. He tagged my wall.”

One of the videos shows the man in handcuffs as an officer tells him, “Get up, let’s go.” That said, it’s unclear if the man has since returned to the property. Thompson said she is afraid of what this man is capable of doing to her. Los Angeles is facing a serious homeless encroachment problem. Earlier this year, a homeless man was seen on surveillance footage forcing a young woman into a residential garage where she “almost raped her” before she could escape the ordeal. Surprisingly, the suspect tried to force his way into another woman’s apartment just 20 minutes later, but he fled when she screamed, Los Angeles police said.

Video footage, first obtained by ABC 7, showed the man holding the woman by her arm as they walked through the coveted West Hollywood neighborhood. At one point, he is seen pushing the woman into the garage of a stranger’s house in the 800 block of North Vista Street near Melrose Avenue around 12:30 p.m. The woman is seen moments later, running out of the garage to her freedom before seeking help. Afterwards, the unidentified perpetrator is seen walking back out of the garage.