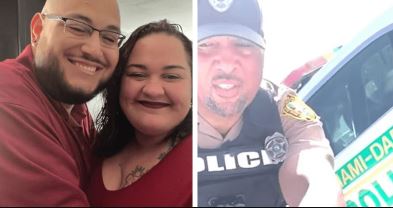 In shocking news, Miami-Dade police prevented Sabrina Enciso, a woman who is seven months pregnant, from going to the emergency room on the west campus of Jackson Memorial Hospital. This was even after she begged them, saying, “I think I’m going to miscarry.” She and her husband, Kevin Enciso, were detained for more than 20 minutes by police.

Earlier, Kevin was driving his wife to Jackson Memorial Hospital because she had been involved in a car accident the day before and was in pain. As he approached the emergency room, he noticed two police cars blocking the parking lot entrance. Quickly, he honked at the officers to make way for his car, after which an officer immediately moved out of the way. The second officer, on the other hand, decided to make a traffic stop and refused to let them through.

Sabrina is 32 years old and Enciso is 28 years old.

In the video footage, the 32-year-old mother-to-be insisted that she felt she was in danger of miscarrying and was also in a lot of pain, but the officer paid no attention to this, going so far as to comment that she was fine as she was still ” alert” and “breathing”. They then proceeded to question the couple for 20 minutes, just a few hundred meters from the emergency room. They even called Fire & Rescue to the scene.

One of the police officers, later identified as Officer Daniels, began a traffic stop and asked Kevin, 28, for his driver’s license. In cellphone footage recorded by Enciso, he can be heard telling the cops, “I gave them a really nice honk, once, for getting out of the way. I have an emergency and that’s why I’m in the ER for me.” wife.” He also refused to hand over his license because he “hadn’t committed any crime.” The police supervisor asked Kevin to get out of the car because he refused to give the officer his license.

“I’m in a lot of pain,” Sabrina said in the video. She stated that the day before she had had an accident and her doctor had advised her to visit the hospital. “Because I think I’m going to have a miscarriage,” Sabrina added. On camera, she Sabrina said, “I’m going to the ER today because that’s what my doctor said I had to do, to make sure I don’t lose this child.” She kept recording the conversation at all times. The Enciso family knows JMH, as Sabrina also works for the hospital as a financial analyst. The footage shows Officer Daniels ordering Sabrina to “sit on the curb over there” after questioning her as they waited for the fire and rescue service just feet from the emergency room.

Only after first responders entered and measured Sabrina’s “shooting” blood pressure did the cops allow the two to enter the hospital. According to the Daily Mail, Sabrina revealed that she was seven months pregnant and had suffered an unfortunate miscarriage last year. This added to her panic and concern about being held by the police. The couple spent hours in the emergency room after the ordeal, after which they were informed that Sabrina was fine and that she was, in fact, expecting twins. The father-to-be shared a post on Instagram, writing, “Sometimes when you expect a miracle… you get two! #EncisoTwins2023.”