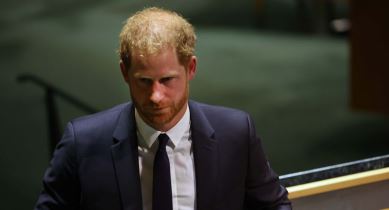 Prince Harry was recently seen waiting on a $9 million private jet for more than 30 minutes after he forgot his polo kit and his staff delivered it to the idle plane. The Duke of Sussex was seen boarding the Bombardier Challenger 600 at a Santa Barbara airport. around 11 a.m. on Wednesday, August 25. The prince was traveling to Aspen to compete in a round robin tournament. Harry got to the airport on time in his electric Audi SUV, but ended up sitting idle for at least 30 minutes while his staff loaded up his polo kit.

The Duke of Sussex’s staff, who is often seen preaching his views on the climate crisis and deteriorating environment, arrived at the airport with his polo team in a gas-guzzling Range Rover. Two men were seen delivering Harry’s equipment and mallets in a golf cart.

The $9 million Bombardier Challenger 600 is owned by Prince Harry’s beloved friend and Florida-based businessman Marc Ganzi, who is a polo enthusiast and has been seen playing with Harry’s brother Prince William and their father, prince charles

Before returning, Harry said that he and his team were delighted to once again return to the stunning grounds of Aspen Valley Polo Club for the annual Sentebale ISPS Handa Polo Cup. Harry will join Nacho Figueras at the Aspen Valley Polo Club, where they will play together on the same team.

It is not yet clear whether Meghan Markle and her two children, Archie and Lilibet, will be seen cheering on the duke or not. The annual event is held at the Aspen Valley Polo Club and serves as the largest fundraising event for the charity to advance its mission on behalf of young people in Lesotho and Botswana.

However, Prince Harry is being criticized for his hypocritical behavior. Climate experts believe the Duke of Sussex’s hour-and-a-half trip to Aspen would release more than six tons of carbon dioxide for the one-way trip and would double if he returned on the same plane. This is not the first time the Sussexes have been criticized for using private jets despite preaching about the environment. Harry and Meghan received a huge backlash in June after they flew back to the UK for the Queen’s Platinum Jubilee celebrations aboard a private plane.

Climate experts previously revealed that the trip to California from the UK resulted in ten times more carbon emissions than any average commercial flight. To defend himself, Prince Harry has previously said that he travels commercially 99 percent of the time, but is forced to opt for private planes in case of emergency and safety. He also claimed that he tried to balance the effects of private flights by offsetting his CO2 emissions in 2019.