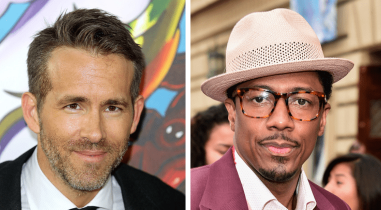 Ryan Reynolds’ little internet jokes are part of his trademark wit, as he’s not afraid to pull some sharp but hilarious pranks on his famous friends. After Nick Cannon announced that he is expecting his eleventh child with model Alyssa Scott, Reynolds took to social media to joke with the TV host. Reacting to the news of Cannon’s announcement, Reynolds tweeted, “We’re going to need a bigger bottle.”

This could very well be a reference to the growing brood of Cannon children. At the same time, the actor could be referring to his coveted gin company, Aviation Gin. Notably, he is also expecting his fourth child with his wife Blake Lively. Previously, Scott had shared a series of images from an intimate maternity photo shoot with Cannon, according to People. She captioned one of the posts, “This is a MIRACLE and a BLESSING ?.”

This will be Cannon and Scott’s second child together, following the death of his son Zen at five months. Notably, Cannon joined the famed ‘Deadpool’ actor for a Father’s Day ad where the former explained to his viewers the process of making “the mother of all cocktails: ‘The Vasectomy.'” The then father of eight had also joked, “God knows he needs one” before proceeding to make the drink.

Over the course of the ad, his recipe was full of teasing undertones. He filled a tall glass with ice, in the same way that “children fill our lives with so much joy.” From the “sweet” cranberry juice that resembled his smiles, he moved on to the bubbly 3 oz bottle. of tonic “So bubbly. Just like I feel every day when I wake up after a long night of sound sleep,” he joked. ”

And that sounds like a delicious vasectomy,” he says, introducing his creation before Reynolds bursts in with “I’ll take that, Nick. I have three kids.” Just as he takes a sip, Cannon says “I’m eight.” The host of ‘The Masked Singer’ is currently the father of ten children by six different women. He shares three children, Golden ‘Sagon’ Cannon, Powerful Queen Cannon and Rise Messiah Cannon with model Brittany Bell, twin sons Zion Mixolydian Cannon and Zillion Heir Cannon with Abby De La Rosa.