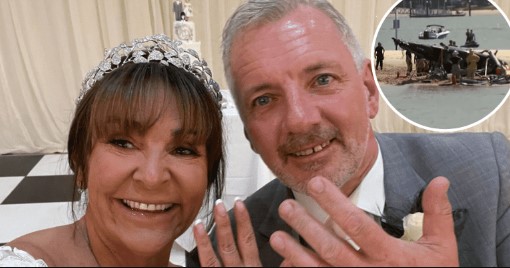 A British couple died in a helicopter crash near Sea World on Australia’s Gold Coast. Sadly, four people died on the afternoon of January 2 after two helicopters collided in mid-air in front of hundreds of terrified tourists, including Ron and Diane Hughes, ages 65 and 57, respectively.

The third British victim has been identified as pilot Ash Jenkinson, 40, who was born and raised in the West Midlands before moving to Australia and had just become a father. Vanessa Tadros, an Australian mother, also died in the accident. She died when the helicopter fell more than 300 meters to the ground after the collision.

Ron and Diane Hughes  Cause of Death

Mr and Mrs Hughes, natives of Merseyside, were married in August 2021 and were on holiday in Australia when the accident occurred. His family issued a statement expressing their distress and saying they are still trying to contact friends and family to let them know, according to Sky News.

The accident occurred on the Gold Coast on January 2 around 2 pm near Sea World in Queensland state. During the school summer holidays, the park would have been packed with families having fun. According to preliminary investigations, two helicopters, one taking off with seven people on board and the other landing with six, collided with each other.

Despite significant damage to the left front of the other helicopter, where the pilot was sitting, “amazingly” landed upright. Six people were on board this helicopter and five of them had minor physical injuries. Australia’s Bureau of Transport Safety Chief Commissioner Angus Mitchell called the i a “tragic start to the new year”.

He described how the front end of the landing helicopter sustained significant damage when the takeoff helicopter’s primary rotors collided with it 200 meters in the air. The primary rotor blade and gearbox separated from the aircraft’s main fuselage during the operation. Emergency personnel had difficulty reaching the crash site due to a sandbar.

A separate company from the theme park, Sea World Helicopters, sent condolences and said it was “devastated” by what happened. He also said he was helping with an investigation into the cause of the crash that had been launched by authorities. A statement read: “We and the entire flight community are devastated by what happened and our deepest condolences go out to everyone involved and especially the loved ones and family of the deceased.”

According to John, a witness, there was a “massive, massive bang” and theme park workers rushed to block off the areas closest to the crash. John detailed the incident to Melbourne radio station 3AW. “It was just huge. I’m not sure if it was the propellers or whatever collided with each other. But there was this poor lady and her child crying near the helipad.”

Officials, according to Mitchell, will continue to collect all information, including security cameras from surrounding buildings and public camera footage. He said: “What we need to know now is what was happening inside the two cockpits at the time. We know that takeoff and landing are critical phases of any flight where the cognitive workload of the pilots is at its highest.”