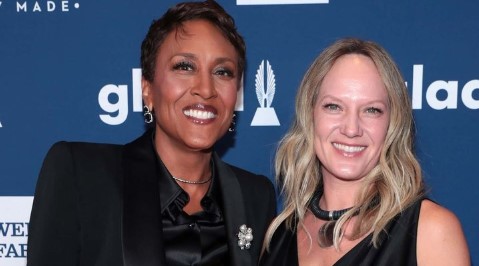 Robin Roberts has unveiled her 2023 wedding plans without hesitation. On an episode of ABC’s ‘Good Morning America’ that aired on Monday, January 2, 2023, Roberts spoke with author Gabby Bernstein about her book ‘Super Attractor: Methods for Manifesting a Life Beyond Your Wildest Dreams’ and the two discussed the things I will “say yes” to this year.

The 62-year-old TV presenter reluctantly acknowledged that she “hasn’t said out loud yet” what her goals are when asked by Bernstein what she intended to “say yes” to in 2023. After some deliberation, Roberts finally stated: “I’m saying yes to marriage. We’re getting married this year. It’s something we’ve talked about but we put it off. She got sick but…I mean saying yes to that, and to the next chapter.”

She added, “I can’t believe I just said that,” as she fanned herself with her cue cards. Following the public announcement of the big plans for 2023, Roberts posted a video of her conversation with Berstein on her Instagram account with the caption, “Say YES to marriage in 2023,” concluding with a ring emoji.

Roberts and her partner, masseuse Laign, began dating in 2005 and it’s been 17 years since they were together. Roberts openly announced her same-sex relationship through a Facebook post in December 2013, despite the fact that her employers and colleagues were already aware of her sexuality.

Both Roberts and Laign have experienced serious health problems during the course of their relationship. MEAWW previously covered Roberts’ revelation about Laign’s health issues in February, where he said: “Late last year, Amber was diagnosed with breast cancer. She had surgery last month and will start chemotherapy this morning.” .

We both thank you for all your well wishes and prayers. Proud of her and all fellow Thrivers for your courage and grace over a Difficult moment”. Roberts herself has battled myelodysplastic syndrome (MDS) and breast cancer. She underwent a bone marrow transplant from her sister, Sally-Ann Roberts, in 2012 for MDS, a form of cancer that affects blood-forming cells.