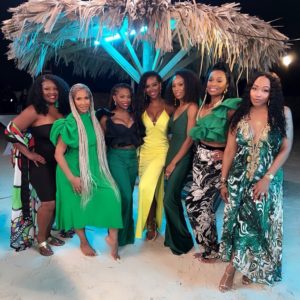 episode 12 of RHOA season 14 will air at 8 pm ET on July 31 on Bravo. In the next episode, Kandi, Kenya, Marlo and newcomer Sanya Richards-Ross will witness an epic argument between Sheree and Drew.

All about RHOA season 14 episode 12

In the next episode of RHOA, the ladies get together to eat, but Shree and Drew end up arguing while the other ladies laugh at all the drama.

In the confessional, Shree says:

“I think Drew secretly loves me. This bitch is looking for my attention because we see that she is not getting it at home.”

The ladies find it “funny” that two are fighting over nothing. Even Kenya found the situation comical. In the confessional she said:

“Drew loves to fight. Drew has a sign on the side of the road ‘will fight for free just tell me where'”.

The show films the lives of women living in the Atlanta metro area as they deal with their personal, social, and professional lives. This season, it looks like Shree will steal all the limelight, as Andy Cohen said in a Bravo clip:

“I will say that Shereé is making history throughout the season. It is an important season for Shereé.”

“As the journey to Blue Ridge continues, Marlo stands firm on the ultimatum she gave to Kenya; the feud between Drew and Fatum reignites when Fatum shows up unexpectedly. Marlo breaks down and makes a shocking decision.”

In episode 11, Fatum, a long-time friend of cast member Sheree, clashed with Drew once again on the trip to Blue Ridge. The duo had previously fought on multiple occasions, which is why Drew refused to sit next to her on the trip.

But during a group gem mining activity, Fatum tried to sit near Drew but she moved away, prompting Fatum to yell at Drew.

Marlo was dealing with some clashes with Kenya at Blue Ridge, but Fatum and Drew’s argument was the last straw for her. After the ladies returned to the cabin, Marlo burst into tears and called a meeting at the house, announcing that she was cutting the trip short.

She then asked everyone to pack their things and leave, since the trip was stressing her out instead of relaxing her. As she left, Drew did one last dig at Fatum and accused her of being Shereé’s “lapdog”.

Tune in Sunday on Bravo to watch the hilarious argument between Shree and Drew on RHOA.