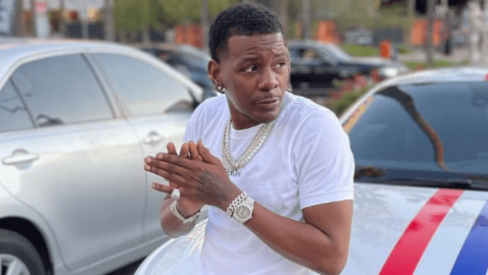 Atlanta rapper J Money reportedly had his jewelry stolen and shot while riding in a Rolls-Royce owned by a member of the Korean royal family. The incident occurred around 4:20 p.m. m. on Nov. 18 in front of the opulent Kurve apartment building in Los Angeles, Fox News reported. Los Angeles Police Department officials stated that J Money was sitting in the car parked in front of the Kurve apartment building at the corner of Wilshire and Hoover, outside the Westlake and Koreatown neighborhoods of Los Angeles.

According to eyewitnesses, the victim was apparently injured but was able to walk with the help of others as police and paramedics arrived on the scene to assist. The rapper was conscious and breathing, but was later taken to the hospital in critical condition, according to the LAPD. According to AceShowbiz, the thieves made off with three metal chains and J Money’s Rolex watch.

Since the culprits fled the site after the robbery and shooting and before the police arrived, no arrests have been made. Although an investigation has been launched, no one has been arrested so far. An investigation has since established that Rolls-Royce did not actually belong to J Money.

It is assumed that Andrew Lee, the registered owner of the car, provided him with a rental car. In addition to being a businessman, Lee is also the crown prince of Korea. He is the creator of the London Trust Media VPN security service. In addition, Lee is recognized as the heir to the Joseon Dynasty, which ruled Korea from 1392 to 1897.

Whether he was the target or in the car when the robbery took place remains unknown. In 2018, Lee was recognized as a relative by the Imperial Highness of Korea King Yi Seok, who also named him the family’s crown prince. Despite having no royal authority, the Korean royal family receives “preference and recognition” in the nation and in the media.

J Money, formerly known as J Futuristic, has collaborated with many artists, including Zaytoven, Migos, and Soulja Boy. He too recently recovered from cancer. He posted on his Instagram account thanking fans for their support and love for him as he battled cancer. He, too, has had multiple legal run-ins, including a 2010 child molestation charge.