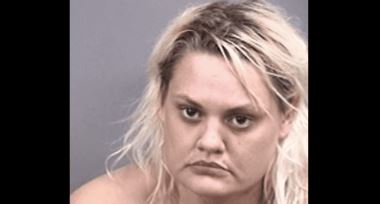 A woman who was stopped by police officers and placed behind the patrol car has now been charged after she shot at them. Rachel Zion Clay was handcuffed last Friday, August 12, near 2960 County Street and Quail Haven Road after owner Dale Moses called 911 due to her strange activities.

The officers reportedly took her to her car, but she somehow managed to free herself from the double-lock handcuffs and put her hands on the officer’s weapon, an AR-15 assault rifle, in the compartment. of weapons. Body camera footage showed the 36-year-old man loading a magazine into the firearm, “turning on the rifle’s flashlight and aiming it out the rear window, and firing,” the Daily Mail reported.

The unwarranted attack apparently left one of the responding police officers, Deputy Keith Williams, and Moses injured. Both were rushed to hospital but were soon released. It has been said that the entire drama went on for hours before Clay turned himself in to deputies. An examination on her discovered that she was high on methamphetamine.

The woman has now been charged with “intent to kill” and her bail is set at $1 million. Describing Clay’s violent actions, Grady County Deputy Gary Boggess said, “It took him 15-20 minutes to figure out how to operate the gun. She was pressing buttons. She was frantic. He also stated: “A ricochet actually hit our helper, grazed him on the back of the neck and then what we think is a piece of shrapnel, or the bullet, hit the homeowner’s father in the chest.” .

In the aftermath of the incident, Boggess shared that the police department will modify processes. “One, I will say it is our console. Where she actually said gun and she was able to see that, that will be replaced. We’re going to put a switch somewhere else in the vehicle to block our gun. It’s a strange deal. It’s one of these probably, I’m not going to say one in a million. But you know, it’s one of those deals that, you know, once it happens, you go back and try to make sure it never happens again. And that’s what we’re seeing,” he added.

The Grady County Sheriff’s Office Facebook page also posted about the incident. An August 12 post read: “Today we had a deputy who was shot and stared at, with non-life threatening injuries. He is resting at home tonight with his family. Please keep him and our office in your prayers.” The statement sparked many comments, one of which read: “Prayers for speedy healing &amp; comfort! And prayers for everyone involved in today’s event. Thank you all for your hard work &amp; dedication, not only today, but always! Today’s events could have had a very different ending, but you all showed extreme patience &amp; proof that the work of all of you &amp; the mission is to protect &amp; attend. Thank you for protecting &amp; serving our community on so many levels!”

Another wrote: “Prayers did y’all always have water today? I’m so glad it ended peacefully. If they need you to donate water I can let the community know. I’ll be happy to donate Gatorade and water.” “Prayers for the deputy and his family and prayers for all law enforcement who try daily to keep us safe! Thank you!!!” added a third.