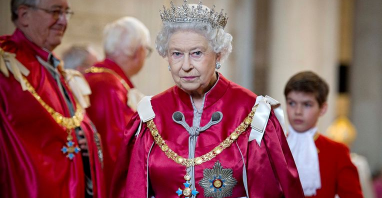 It is no secret that Queen Elizabeth II was adorned with countless precious jewels throughout her life. The Queen’s private jewelry collection is reported to contain around 300 pieces, including 98 brooches, 46 necklaces, 34 pairs of earrings and 15 rings. At her coronation, the Queen herself wore a crown resplendent with jewels, including the world’s largest white diamond, the Koh-i-Noor diamond, which was taken from India.

However, the queen will reportedly be buried with just a few simple sentimental pieces. Her wedding ring, made of Welsh gold and set with diamonds taken from a tiara owned by Prince Philip’s mother, Alice of Battenberg. It is speculated that she could also go to her daughter, Princess Anne. However, it has not been confirmed yet. In 1923, the Queen’s wedding ring passed to her after being given to her parents for her wedding. It was made of gold extracted from the Clogau St David mine.

Despite the wide variety of options, Lisa Levinson, head of communications for the Natural Diamond Council, told Metro UK that the Queen would likely be buried wearing only her wedding ring and a pair of pearl earrings. Her jewelery was stored in the Queen’s Gallery at Buckingham Palace when she was not wearing it. Levinson stated that the Queen was “an incredibly humble woman” and noted that it is “unlikely” that she will be covered in priceless jewels when she rests. The expert said jewelry not buried with Queen Elizabeth is likely to remain in the royal collection.

The official Crown Jewels are held at the Tower of London. Dating back to the 17th century, the collection includes more than 23,000 diamonds, sapphires and rubies. Along with the queen, Princess Margaret, Princess Anne and Princess Diana all owned Welsh gold wedding rings. The only other piece of jewelry the Queen is expected to be buried with is her signature pearl earrings. Wearing pearls is a royal tradition dating back thousands of years, according to “The Queen’s Jewels” author Leslie Field.

The Queen’s state funeral will be held at Westminster Abbey on Monday 19 September, after she remains in her oak coffin for four days in Westminster Hall. Her coffin arrived in Buckingham on September 13. Dozens of people, braving rain and bad weather, reportedly cheered and cried when the Queen’s coffin arrived.

When the queen lies in state, her coffin will be draped with the royal standard, as it was in Edinburgh. The banner will be accompanied by the Imperial State Crown, which the Queen wore once a year at the State Opening of Parliament. It has nearly 3,000 precious stones, including sapphires, emeralds and rubies. The crown was made for Queen Victoria in 1838. It contains more than 3,000 precious stones, including 2,700 diamonds.