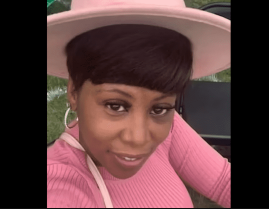 Nishelle Harris-Miles, a 40-year-old woman, died after a nail from the roof pierced her artery during Hurricane Ian in Florida, where she was celebrating her birthday with friends. The group of four women traveled from Dayton, Ohio, to celebrate Nishelle’s 40th birthday.

According to WLWT, the victim’s cousin, Chanel Matson, revealed some of the details of Nishelle’s death through a now-deleted Facebook video on her page. Maston said the group was trapped in the house for nearly 14 hours as the water continued to rise.

According to WDTN, after the incident, Nishelle captured the video to consult with loved ones, saying, “We tied each other up with a sheet, lay down on the mattress. That water came out of the floor so fast, so fast. The roof was tearing us apart.

She added: “We tried to kick the ceiling and lay down on the mattress. She kicked that ceiling, so that ceiling wouldn’t crush us and the ceiling fell in, and we left.” “We started calling people before the water really started to rise,” Maston said. She claimed, “We called 911.

We called 211. We called everyone to get us out of there, and no one came.” She then added that her cousin, Nishelle, was fatally struck by a nail from the collapsing roof: “She was trapped underneath. A nail punctured her main artery, she had just turned 40.

On September 23, she had just turned 40. She died.” nine days after his birthday. Maston also stated, “She loved everything, she loved life.” Nishelle died on Thursday, September 29, the Daily Mail reports. The other three women flew to Ohio on Friday, September 30, however the remains of the victim still lie in Florida.

On Sunday, October 2, a balloon release was held in Nishelle’s honor at her home in Dayton, Ohio. Her daughter wrote on Facebook: “Hey everyone we are having a balloon release tomorrow for my mom between 5:30 and 6am at our house. Blue and white balloon.”

Meanwhile, according to CNN, Hurricane Ian killed nearly 76 people and more than 1,100 people were rescued from various parts of Southwest and Central Florida and 800 were rescued in Lee County.

The post also suggested that many of the deaths from the hurricane have taken place in Lee County, which includes Fort Myers and Sanibel Island, where at least 42 people have died. The storm is said to have weakened on Saturday, October 1, as it moved into the mid-Atlantic, yet it has left thousands of Floridians without power and water.