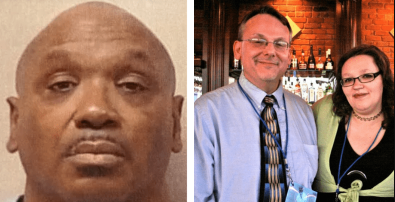 New details revealed by police indicate that Nichole Guertin, 35, the girlfriend of WWJ 950 late-night host Jim Matthews, was discovered bound, duct-taped and bleeding on Friday, September 23, in a parking lot near the township house in Chesterfield where she lived with Matthews.

Police say that after being stabbed multiple times, she managed to get out of the house with the couple’s 5-year-old daughter, Rosie, and flagged down a passing driver and called 911. Hunter Matthews, the 10-year-old son of Matthews, was discovered in a closet in the house. It was claimed that he tried to fight the attacker before being beaten with a hammer, tied up with duct tape and placed in the closet. According to WXYZ, the young man underwent brain and ear surgery and is now in serious condition.

Matthews’ brother Joe Nicolai told WXYZ, “I think Hunter was trying to fight this man who was attacking and trying to kill his father, and that’s how Hunter ended up wounded, tied up and locked in a closet.” . The five-year-old daughter was also injured, but now she is fine.

In a GoFundMe page created on Sunday, September 25, the children’s aunt, Ashley, provided information about her condition. Her note read: “I wasn’t going to try to finance myself, but it was recommended to me. Anything donated goes to these two children. They’ve been through a lot and I feel like the least I can do is create something to help them adjust to what comes after this tragedy.” The page has raised over $15k so far. Meanwhile, according to police, Arthur Levan Williamson, 55, the suspect, was discovered in the basement of the home with self-inflicted injuries and an overdose.

Williamson was a frequent visitor to the house and was said to know the victims. According to police, Williamson was given Narcan to revive him and he is in stable condition at the hospital. Although authorities are still unclear as to what prompted the attack, Williamson has been charged with seven felonies, including first-degree murder. The investigation is still ongoing. Meanwhile, Matthews’ devastated coworkers paid tribute to him, calling him “one of the nicest guys you’ll ever meet.” Our thoughts and prayers are with Jim’s family and friends during this difficult time,” the WWJ Newsradio 950 statement said.