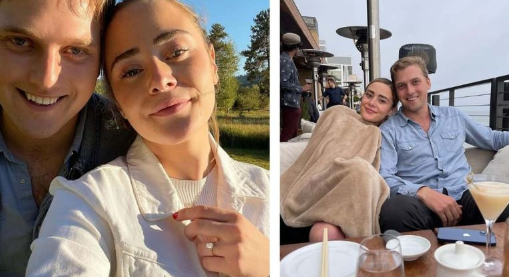 The first White House wedding in more than ten years and the first for a president’s grandson, Naomi Biden and Peter Neal exchanged vows on Saturday morning, November 19. President Joe Biden and First Lady Jill Biden, Naomi’s grandparents, were present during the private ceremony. on the south lawn.

Following an afternoon reception with dancing and dessert at the Executive Mansion, the daylong celebration will continue with a White House luncheon for the bridal party and close family members, according to People. Naomi, 28, is a Columbia law graduate and the eldest daughter of the president’s son, Hunter Biden, and Hunter’s ex-wife, Kathleen Buhle.

Neal, 25, studied law and interned for Hillary Clinton’s presidential campaign, as well as at the White House during Barack Obama’s presidency. Naomi and Neal are reportedly currently living on the third floor of the White House residence, one floor above the First Family’s main residence and the same place where Michelle Obama’s mother, Marian Robinson, resided during the his son-in-law’s presidency. .

In September 2021, the couple had announced their engagement and, earlier this year, they made it official that the White House would host their wedding. Since presidential photographer Pete Souza married Patti Lease in the Rose Garden in 2013, their marriage was the first to take place on White House grounds, according to the report.

President Biden, who turns 80 on Sunday, November 20, has spoken at length about the close bond he and each of his grandchildren share. Just before Biden took office, Naomi, who also lives in Washington, DC, told Today’s Jenna Bush Hager that she was excited to learn that her “Dad” would be living just a few miles away.

In a previous interview with PBS Newshour, Naomi explained that her grandfather is at the center of the tight-knit Biden clan. “We have grown together,” she said. “He made sure that every tradition, every holiday, we’re all together… I don’t think there’s ever been any decision, no matter how big or small, that we haven’t made up our minds as a family,” Naomi added. .