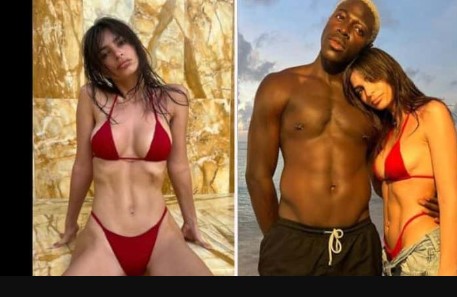 Emily Ratajkowski was spotted out and about with singer Moses Sumney in a daring red thong bikini in the Cayman Islands on Monday, January 2. The supermodel who recently split from Pete Davidson flaunted her abs, cleavage and toned legs as she hugged the handsome singer.

According to Daily Mail, the duo who have developed a close friendship have been seen together on several occasions. Moses previously described her sexuality as “fluid” and said he’s “not gay but he’s not straight.” , folk, art rock and baroque pop. He became popular with some of his music albums, including ‘Mid-City Island’, ‘Aromanticism’ and ‘Græ’.

He was raised by pastoral parents in California. He majored in creative writing and studied poetry, according to his Wikipedia profile. Sumney had acted in a few of the series including HBO’s ‘Random Acts of Flyness’ Season 1 Episode 4 and also appeared in the movie ‘Creed’ and worked on the soundtrack alongside Ludwig Gorannson and Tessa Thompson.

His single, ‘Me in 20 Years’, was featured in a special episode of the HBO drama Euphoria in 2020. Meanwhile, he also released the self-directed music video ‘Cut Me’ in March 2020 and also released ‘Bless Me’ as a single. from the second part of his album, ‘Græ’, in May 2020.

He also won the SXSW Film Festival Special Jury Prize for his album ‘Quarrel’. He was nominated for a Camerimage and UKMVA award. In 2018, he also won Best Outlier for Aromanticism at the Libera Awards Moses has also been famous for some of his strong opinions through interviews with him.

He weighed in on the #MeToo movement in an interview with The Independent, he said: “Men should see this moment as an opportunity, not a threat. Beyond oppression, beyond the idea that value came from ruling others”–with which he adds, he does not connect–“men have the right to find the socially responsible value they have”.

In his case, he loves “my height, my strength and resilience, and my desire to nurture others”: there is much more room for the still limited interpretation of masculinity that we have today. “I hope to bring some of that into the conversation. That’s all I can hope for. If I do that, I’m happy.”

In an earlier interview with The Guardian, he also spoke about his preferred musical genre, stating: “I’ve realized that genre doesn’t really matter to me and my work extends beyond a binary, basically,” he says with a Shrug. More than anything, he says he is referred to as “an R&B artist, which really annoys me.

It’s the only [genre tag] that feels like a visual identifier rather than an aural identifier.” He also explained how he identifies himself as a black artist in the industry: “I reflectively find the need to be different in some way as a black artist, to try to change the narrative of what a black man can stereotypically be and present an alternative. “, He says. “And it’s a very negative drive to have. He added: “

Read Also: Who was Cristopher Colbert? Wiki, Biography, Age, Family, Cause of Death