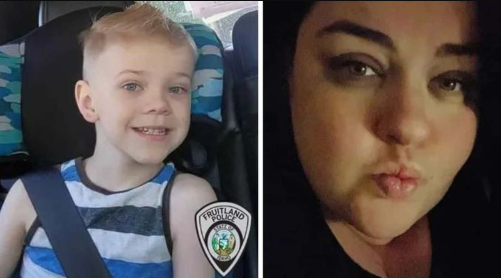 Fruitland Police announced that a woman was arrested Monday, November 14 in connection with the 2021 disappearance of young Michael Vaughan. Vaughan had disappeared weeks before his fifth birthday and Sarah Wondra, 35, is now in custody. She was accused of failing to report a murder and there is also evidence that the woman made TikTok videos where Michael’s missing persons flyers were seen.

Wondra lives on the property where law enforcement officers believe the remains may be buried; she is a stone’s throw from the Vaughan family home. Investigators had searched hundreds of acres of land without success, before beginning their search at Wondra’s home. Police received more than 1,000 tips over the past year before a drunken alcoholic led them to the woman’s home, where a search has been underway since last week.

K-9 volunteers have also been on the property helping with the search. On Sunday, before the announcement of her arrest was made, a YouTube channel posted a video of Wondra speaking in front of a refrigerator with the frill attached. “It’s very, very disturbing to see a missing person flyer in a potential suspect’s refrigerator,” Fruitland Police Chief JD Huff said.

He also spoke to the press after her arrest outside her home, according to a FOX News report. “Our investigation determined that Sarah Wondra may have known of Michael’s death and she did not report it,” he said. “We do not believe that she is the only person who has knowledge of this, and we will look for those people who may possibly be connected.”

Prosecutors have already dismissed a series of felony charges against Wondra regarding her involvement in an unrelated firearms case that also involves her husband, Stacey Wondra. Sarah is due to appear in court on Monday, November 21. A preliminary hearing is also scheduled.