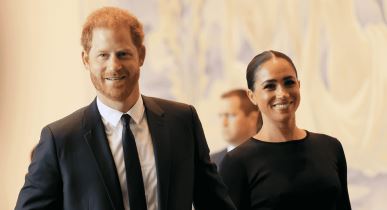 Making a guest appearance at Meghan Markle’s interview, Prince Harry revealed a glimpse of his incredibly effusive sentimental side. The Duke of Sussex, 37, revealed some of the daily compliments he gives her wife, including calling her a model. Montecito Mansion. Meghan appears on the cover of the latest issue of The Cut, in which she talks about a variety of topics, including her relationship with Prince Harry.

Meghan spoke on a wide range of topics in The Cut, a fashion-focused publication from New York Magazine, once again taking a furious swipe at the royal family while painting a perfect picture of the Sussexes’ new life in California. The former actress affectionately refers to her partner as “H” or “my love,” according to the interview published in the magazine in which she appears as a cover model while revealing that the couple plans to use their upcoming Netflix docuseries to share their ” love story” with the world.

The Duchess also shared a tearful anecdote about their first tour of the sprawling mansion they now call home, revealing that they came across two ‘connected’ palm trees in the lush gardens, which Harry described as a visual representation of their relationship. According to The Cut interview, Meghan whispered, saying, “One of the first things my husband saw when we walked through the house were those two palm trees.” She added: “See how they’re connected at the bottom? He’s like, ‘Honey, that’s us.'” And now, every day, when Archie walks past us, he’s like, ‘Hey, Mom. Hello Dad'”.

Meghan added that the couple had only toured the property’s grounds before deciding it was the ideal place to settle, recalling how her real estate agent was told, “We have to get this house.” Meghan and Harry posed for a pregnancy photo shoot on the estate’s grounds, which they posted as they announced they were expecting their second daughter, Lillibet, in February 2021.

While Harry used the sentimental image of intertwined palm trees to represent the couple’s marriage, Meghan prefers a different analogy, comparing the couple to “salt and pepper.” Meghan shared in her interview about one of the lessons, she recalled learning at a young age from a friend’s mother, explaining: “Salt and pepper are always passed together. You never move one without the other. That’s me and Harry.” . We’re like salt and pepper. We always move together.”

Harry made a brief guest appearance during the interview and spoke about his wife, telling the interviewer how he had assured her that she “is a model” after she expressed uncertainty about her on-camera abilities after her “ten hour “. cover shoot for The Cut, which occurred the day before the sit-down conversation. Allison P. Davis, a New York-based writer, claims Harry first “marvelled” that his wife “had been gone for like ten hours” during filming before revealing that the first thing Meghan said when she got home was ” I am not a model”. “No, you are, of course you can be a model.” And she says, ‘I’m mom!’ And it’s like, ‘You can be both,'” Harry said, earning as many points, according to Davis.