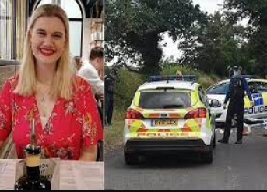 A man on trial for Megan Newborough‘s murder has confided in a co-worker that he was sexually abused as a child, a court has been told. Ross McCullum admits to the manslaughter of the 23-year-old human resources worker by strangling her at her home in Windsor Close, Coalville, on Friday August 6 last year. The 30-year-old defendant denies murdering her, however, claims he “lost control” after a sexual encounter between the couple triggered an episode of post-traumatic stress disorder (PTSD) related to him being abused by older boys when he was a young man

Prosecutors do not accept the statement and insist that the actions of McCullum, who slashed Megan’s throat with a kitchen knife after strangling her, amount to murder. His trial, now in its sixth day, resumed today, Monday 7th November, at Leicester Crown Court. The jury has heard that the victim and the accused were co-workers at Ibstock Brick in north-west Leicestershire.

Megan Newborough Cause of Death

The couple had struck up a “sort of relationship” after Megan was involved in conducting an audit of the company’s lab, where McCullum worked, earlier that summer. Joe Howard, a senior lab technician at Ibstock Brick, told the court that he had been responsible for training the defendant and supervising some of his work as a lab assistant.

He recalled Megan and McCullum “flirting with each other” as she and a colleague from human resources conducted a privacy and data protection assessment involving paperwork and files stored in the lab. Howard said that he later realized that the couple had become an item. He said: “There was a time when I observed Ross and Megan at work, I think it was during July of last year.

Megan would walk into the lab and they would almost act like a couple. On occasion, I caught them hugging and kissing in the same laboratory”. Mr. Howard said that the defendant was a reliable worker, however, he recalled that his behavior markedly deteriorated when he did not take the medications prescribed by a doctor for attention deficit hyperactivity disorder (ADHD). ”

He mentioned that he had ADHD and that he was on medication for it,” he said. When he forgot to take it, I watched his behavior change.” He said this took the form of “immature” and “teenage” behavior. “He became very boisterous,” he said. “He would be cursing people and start using very inappropriat language.”

Howard recalled McCullum telling him that he and Megan had once had sex together in a pond in the country near his workplace. He told the jury that the defendant also showed him nude photos of Megan on his phone that he deemed “inappropriate.”

On one occasion, the lab technician said that McCullum confided in him that he had been sexually abused when he was a child. “The conversation had been about relationships and houses,” he said. “This led him to openly tell me that he was raped when he was a child.” He said a family friend took him to a wooded area and was looking after him. He said that he was forced to undress and perform sexual acts with this person.”

Howard added: “My response was that he was brave to talk about it and that I would support him. It was a deluge of information from him. I eventually forced him to stop because he was bugging me. The court heard that Megan and McCullum had met at his house for a sexual encounter the night of her death while his parents were away.

But the prosecution alleges that Megan died within 40 minutes of arriving at the address shortly after 8 p.m. m. The defendant, who did not have a driver’s license, is alleged to have loaded Megan’s body into his white Citroen C3 and dumped her semi-naked body in the thick brush of Charley Road, a remote country road near Woodhouse Eaves and Beacon Hill Country. Park.

Earlier, he had dropped his phone on Hermitage Road, Whitwick. He left her car in the parking lot of Loughborough College, where the jury was shown CCTV footage of the defendant disposing of Megan’s boots, glasses and other personal items, as well as bloody sheets and other incriminating evidence in nearby bins. Megan was reported missing by her family the following afternoon, Saturday August 7, 2021, after she failed to return home. Her body was found at dawn the next day. The trial continues.