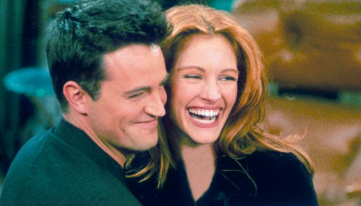 Matthew Perry has revealed how he pursued Julia Roberts through hundreds of fax messages before breaking up with her out of fear she would leave him. The star began a relationship with the Oscar-winning actress after she made a guest appearance on ‘Friends.’ They dated between 1995 and 1996. Perry told The Times: “I sent her three dozen red roses and the card said, ‘The only thing more exciting than the prospect of you doing the show is that I finally have an excuse to send you flowers.’

Julia not only agreed to do the show, but he also sent me a gift: bagels, lots, lots of bagels. While Perry was filming a movie in France, “The Pretty Woman” star began what he now calls a “three-month courtship” after accepting an offer to appear in a special episode of “Friends” in season two. Daily faxes were exchanged during this time. They had already become a couple when filming for the episode began.

In his forthcoming autobiography, “Friends, Lovers, and the Big Terrible Thing,” Perry writes that before email became popular, they communicated through hundreds of messages. Perry writes: “Three or four times a day I would sit by my fax machine and look at the piece of paper that slowly revealed her next missive. I was so excited that some nights I would find myself at a party sharing a flirtatious exchange with an attractive woman.

And cut the conversation short so I could run home and see if a new fax had come in. Nine times out of ten, one had.” Perry eventually started dating Roberts, but he dumped her two months after she appeared on the show. He admitted: “Dating Julia Roberts had been too much for me. I was constantly sure she was going to break up with me. Why wouldn’t I? I wasn’t enough; I could never be enough; I was broken, bent, nasty.

So Rather than face the inevitable agony of losing her, I broke up with the beautiful and brilliant Julia Roberts. She might have considered herself living in the slums with a TV boy, and the TV boy was now breaking up with her. . I don’t begin to describe the look of confusion on his face.”

Perry admitted that five years after her breakup, she watched Roberts win an Oscar for her performance in “Erin Brockovich” while he was “sweating and shaking” in a rehab center with other patients. He wrote: “As she was giving her speech, a voice rose in that rehab room, urgent, sad, soft, angry, pleading, full of longing and tears.

I made a joke. ‘I’ll take you back.'” -said. The entire room burst out laughing, though this wasn’t a funny line on a sitcom. This was real life now. Those people on TV were no longer my people. in blankets, they were my people now. Her book ‘Friends, Lovers and the Big Terrible Thing’ is expected to come out on November 1st.