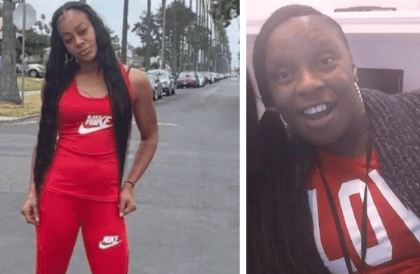 Family members have identified the latest two victims of the fiery car crash that killed a pregnant mother, her unborn child and four others at a Los Angeles intersection on Thursday, August 4. During a vigil on Wednesday, August 10, NBC Losangeles confirmed that Lynette Noble, 38, and her friend, Nathesia Lewis, 43, were killed when the car driven by Nicole Lorraine Linton, 37, headed south on La Brea Avenue at a speed of 90 miles per hour.

The car ran a red light and crashed into multiple cars on Slauson Avenue around 1:30 p.m. m. of August 4. According to ABC7, it took several days for family members to learn that Nathesia was also a victim of the fatal accident. According to the station, she had to be identified through DNA, due to the severity of her injuries.

Meanwhile, Jasmond Nelson, Nathesia’s sister, told the outlet: “My family and I, we watch the news like everyone else,” adding: “We pray for the children, for the pregnant woman, for her family, but without knowing it we, my sister and our family were also serious victims”.

According to a GoFundMe fundraising page launched to help Nathesia’s children and cover her funeral expenses, she leaves behind six children, ranging in age from 2 to 23, and a young grandson.

In addition, another GoFundMe page was also created for Lynette Noble, describing her as “one of the most kind, gentle and loyal people.” The page also added, “despite the difficulties in her life, Lynette made the most of every situation.”

The deadly crash also claimed the lives of 23-year-old pregnant Asherey Ryan, her boyfriend Reynold Lester, 24, and her 11-month-old son Alonzo. Five other people were being treated for minor injuries, after which they were released.

Nicole Lorraine Linton has been charged with six counts of murder and five counts of felony vehicular manslaughter. She could face life in prison if she is found guilty on all charges against her.

Witnesses described how there was a terrifying loud noise at the time of the crash, followed by fire and electrical sparks. Thick plumes of smoke were seen billowing into the sky before firefighters arrived.

Read Also: Who was Elizabeth Hammond? Wiki, Biography, Age, Family, Cause of Death